What is the FA Charter Standard Scheme? 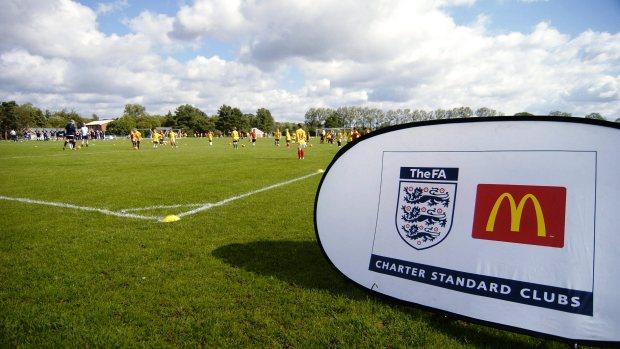 At a time when participation in grassroots football is waning, it’s essential that local clubs offer safe, well run facilities for players in order to maintain participation levels. A major factor in the decline of the local game in Britain relates directly to under-funded, substandard coaching and facilities – which is why the FA partnered with McDonald’s to launch the FA Charter Standard programme.

This national scheme is one of recognition and reward, which aims to publicly acknowledge and support those local leagues and clubs that deliver excellence on a daily basis. Organisations at the grassroots level that can demonstrate the consistent delivery of quality coaching, well run facilities and a safe playing environment may be awarded the FA Charter Standard kitemark – which delivers a range of benefits to both players and local organisations.

Recognising excellence for more than a decade

Since the scheme’s launch in 2001, nearly 7,000 clubs have had their efforts recognised, including nearly 700 at advanced level in more than 300 leagues. Coaching staff and league administrators are given help at every stage of the accreditation process, which is split into three different levels.

Most clubs are awarded ‘Standard’ status first, and can work their way up to the advanced level by fulfilling various predetermined criteria.

What must clubs do to gain FA Charter Standard status?

Perhaps the biggest challenge for any club or league trying to gain accreditation under the FA’s scheme is the need to appoint a fully trained Welfare Officer. This job involves ensuring football is played in a climate of cooperation, respect and safety. A Welfare Officer is there to listen to the concerns of both children and parents, and to ensure that any instances of poor practice, unsafe playing environments and abuse are dealt with quickly and fairly.

There are, however, several criteria a club or local association must fulfil in order to obtain their FA Charter Standard kitemark, including performing detailed criminal checks on all volunteers, signing up to the FA’s Respect programme, providing a Level One coach for every team, supplying trained first aiders and putting in place a proper system of club administration. For any club or league that can meet or exceed these minimum criteria, there are some fantastic benefits available.

How can clubs benefit from FA Charter Standard Status?

Perhaps the most sought-after benefit is the FA’s kitemark itself. Any club or league that can display it on their paperwork and website should be able to attract more players. This highly sought-after award tells parents, sponsors and the public that this is a club that can be entrusted with the welfare and safety of its players – and that is crucial for a local club trying to grow its membership.

There are also some tangible benefits associated with FA Charter Standard accreditation, which include:

- Expert support with applications for funding

How do clubs and leagues apply for FA Charter Standard status?

Clubs and associations can download an application form from the FA website, and then return it to their County FA office. The application form for each level of award will state the qualifying criteria, and request that supporting evidence is supplied to prove that the relevant criteria have been met. This can be in the form of documents, written statements or video. Each application is then assessed on its individual merits by a nominated person at the County FA.

It is not unusual for clubs to fail with their first application for FA Charter Standard status. However, when this happens clubs are given a detailed report of why their application was rejected – along with a detailed action plan.

Every club with the FA’s kitemark must continue to uphold the standards of FA Charter Standard status, as each award is only valid for a year. It is renewed when the club reapplies for affiliated status with the FA.

While the benefits of this scheme are being welcomed by grassroots clubs, they stop some way short of providing the funding most local clubs in the UK are desperate for. However, there is no doubt that coaching standards and playing environments are now improving because of the initiative – albeit slowly.