How to Become an FA Accredited Football Referee 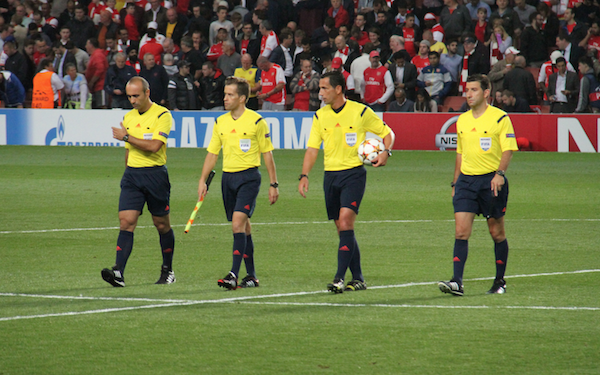 Being an FA accredited referee is a highly rewarding and enjoyable job; in fact many referees claim it’s the next best thing to actually playing the game.

The role of the modern referee is vital in many respects. As well as officiating matches, referees play important roles in their local communities, and work with footballers to improve their discipline and focus.

If you’re thinking about becoming an FA accredited referee, you should prepare yourself for a lot of hard work. The road to the Premier League starts with a very simple questionnaire.

Are you eligible to be an FA accredited football referee?

In order to be considered for a County Football Association referee course, you must be able to answer ‘yes’ to the following questions:

If you can answer ‘yes’ to all three of these questions, you can apply to your local County FA for a place on a Basic Referee’s Course.

What is the Basic Referee’s Course?

After you’ve registered with your County FA, you will be able to attend a Basic Referee’s Course. In order to pass, you will need to do the following:

After you have satisfied the qualification criteria, you will become a level seven referee. However, you will start at level eight if you are under 16 years of age. You will now be qualified to referee local amateur football.

Get the right equipment

Progression through the ranks

After you have spent at least a year refereeing at level seven, you will be eligible for a promotion to level six. You will need to attend further FA training and be assessed during at least 20 matches. In order to gain your level six qualification, you will need to pass a knowledge test and secure a satisfactory assessment score over an average of least 20 matches. A level six referee can officiate county matches

Depending on your FA County’s development strategy, you might be able to take part in an incentive scheme operated by the FA and the Referees’ Association. The aim of this national scheme is to get young, upcoming referees involved in their own development, to provide in-service training and to mentor new referees throughout the training process.

Every time you want to make the step up to the next level, you will need to undergo more training and assessment. Experience is vital here; the more you referee, the faster you will progress through the ranks.

Level five comes with the title ‘Senior County Referee’, which allows the individual to referee senior county matches - and supervise other county officials.

At level 4, referees can be selected by the FA to officiate in a Supply League as a referee and a Contributory League as an assistant.

A level three referee can take charge of Contributory League matches. This is the first level at which an official can act as an assistant referee in the Football League and Premier League

Level two referees can be selected for the Panel League, which is a sort of reserve list of referees for the Conference, the Football League and the Premier League.

Level one referees are on the national list, and they are the officials you will see week in, week out officiating Premier League matches.

Level one referees who can demonstrate a long history of high performance will be considered for the International List. The FA currently has an international list of just 10 referees.

The road to becoming an elite professional referee is a long one - requiring a great deal of hard work and dedication. But if you’re willing to do what it takes, there’s nothing stopping you from reaching the very pinnacle of the profession.