5 of the Most Successful Football "WAGs" 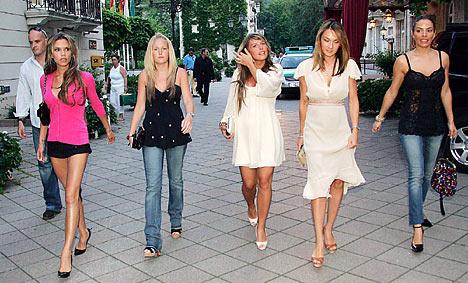 It’s hard to believe that the obsession with WAGs – ‘Wives and Girlfriends’ – has now been around for about a decade. WAGs are the ever growing connection between sports and celebrity. The WAG obsession first came into the spotlight when Manchester United, super star David Beckham started to date Victoria Adams, the couple became extremely popular and very much in the limelight. The nation became fixated with the now Victoria Beckham following her wedding to husband David.

The WAG culture was born during the 2006 World Cup in Germany, where the lives of English footballers’ - better halves - became huge and in many cases fans began to follow WAGs instead of the actual football game, industry in the U.K.

The following of WAGs stems from the nations interest for seeing how the other half live – fuelled by cash pouring out of the English Premier League. People like to keep an eye on the football WAGSs in particular, to keep abreast of the latest trends - to see what they are, or are not wearing – or the latest controversy’s to come out of their very social private lives, quite similar to a Big Brother approach, in many ways keeping an eye on them.

Below is a list of the top five most successful WAG’s to emerge out of the English Premier Football League. Each individual WAG has made a fantastic career for themselves, aside from the success of their famous footballer husbands. A lot of their success may of course be down to being in the limelight of the ever intrusive media; part of everyday life when you’re married to a very rich football player. The below top five WAG’s have each secured themselves either fashion feature columns in national magazine and newspaper titles, launched their own fashion brand or even created their own designs for popular fashion brands. Not to mention launching their own branded fragrances and four out of the five WAG’s have had children.

Victoria Beckham – aged 39 – extremely well known for being a well-loved, popular English businesswoman and fashion designer, not to mention a stunning model and a singer. In the late 1990s, Mrs Beckham rose to fame with the all-female pop group The Spice Girls. More recently in just five short years, not to mention having four beautiful children, Victoria has set herself as a force to be reckoned with in the fashion world with her well-known brand ‘Victoria Beckham’.

Cheryl Cole – aged 30 – is best known as an English recording artist and songwriter, it was during 2002 where Cheryl rose to fame, when she auditioned for the reality television show Popstars - The Rivals on ITV. It was then like Victoria Beckham, Cheryl, began her popular music career, formed part on another successful all-female pop group Girls Aloud.

Cheryl has also been a successful dancer during her career, which has gone hand in hand with her singing career. She has also developed herself as a television personality, beginning her solo career, it was then when she was signed on to be a judge on Simon Cowell’s TV talent show, The X Factor.

Alex Gerrard - aged 31 - is well known as an English model and fashion columnist for the Daily Mirror, also writing for a fashion column in celebrity news and style magazine, OK!

Alex is kept busy looking after her three daughters, as well as being wife to Liverpool and England captain Steven Gerrard. She was described as a leading WAG of the England national football team, alongside Victoria Beckham Alex has also launched her fragrance which has been extremely popular, named ‘Alex’.

Coleen Mary Rooney – aged 27 - is best known for being the wife of Manchester United and England football star Wayne Rooney. Coleen has successfully developed her career as a TV presenter, fashion columnist and celebrity product endorser and is regularly mentioned in British tabloid media, she has recently designed a clothing range for Merseyside based Very.co.uk and well as taking care of her two sons.

Abbey Clancy – aged 27 – is best known as a successful British lingerie and catwalk model and has recently taken on more of a television presenter role, presenting for top television show. Abbey has also recently signed for BBC hit show Strictly Come Dancing, which has a huge loyal following, and when she’s not busy juggling her hectic social life, Abbey takes care of her daughter Ruby.