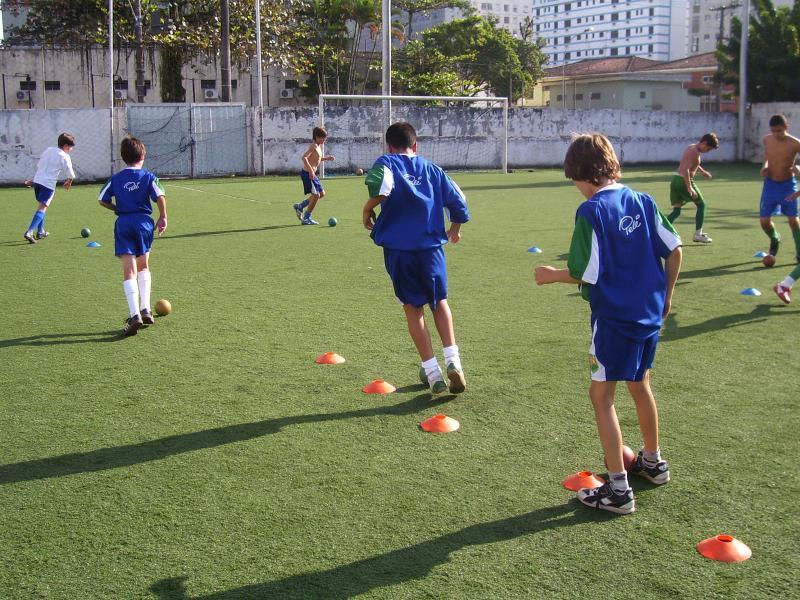 Warming up your major muscle groups before the rigours of a competitive football match or training session is crucial. Properly warmed and stretched muscles not only reduce the risk of injury, they allow you to be at the top of your game from the moment the action starts.

There are some very specific pre-match warm-up procedures you can follow in order to prepare yourself thoroughly in readiness for a period of strenuous activity.

There is no better way to get warmed up for a match than by having the ball at your feet for a few minutes. Partner with a teammate, and start with some light passing - using no more than one or two touches. After a minute or so, start to move around as you pass.

If you’re warming up on your own, place the ball between your feet and tap it from side to side very quickly with the inside of your feet. And to finish, do some 15-yard dribbles while keeping the ball a maximum of 12 inches away from you. Remember, this warming up is about stretching and getting some heat into your muscles - you don’t need to work up a sweat for a pre-match workout to be effective.

Your warm-up routine without a ball should usually begin with some very light jogging to gradually warm your muscles up and get your heart rate up. Some coaches will set up training courses that include walking and running sections. For instance, you might start your warm up by jogging for 20 yards, and then burst into a sprint for another 20 yards - before returning to the start and doing it all again.

By using coloured training markers, you can set out a warm-up circuit based on jogging, sprinting and sidesteps. For instance, you might sprint in green sections, sidestep in red sections and jog in yellow sections. Giving warm-up circuits some tight turns will get the leg and hip muscles working as they will during the cut and thrust of a match.

All of the major muscles in your legs will need to be fully stretched out before you kick a ball, so you should always set aside at least five minutes for stretching before the action begins. Hold onto a teammate’s shoulders and stretch out each calf in turn while keeping the opposing leg bent. You should also ensure your gluteal muscles and hamstrings are gently stretched before taking on any more rigorous warm-up routines.

Warming up in the same way before every match or training session can become monotonous and boring after a while. A great way to mix things up while instilling a sense of team spirit involves setting up some varied and interesting warm-up drills.

Start with three players in a straight line, ensuring the middle player has the ball. All three players should set off in a light jog, and after three or four strides, the player with the ball should pass to a teammate, and run around that player to ensure that the player in possession of the ball is always in the middle. Each player should take possession in turns until the end of the course has been reached.

Man in the middle

Assign five players as ‘attackers’ and have them form a complete circle around two teammates assigned as defenders. The defenders must try to win possession of the ball while the attackers must pass it around. However, if a defender causes an attacker to break the circle, he or she must swap places  - giving each defender the chance to become an attacker.

Use training cones or markers to create a makeshift net, and split players into two teams. The idea of the game is to volley or head the ball over the net without letting it bounce. Much like volleyball, you can pass or head to your teammates, and allow them to send the ball over the net to the other team. A point is awarded to a team when the opposition lets the ball bounce on their side of the net.

Warming up in preparation for a football match or training session is essential for performance and avoiding injury. However, by keeping things fresh and original, you can ensure that warming up remains fun.