The Footballer’s Guide to Ankle and Foot Injuries 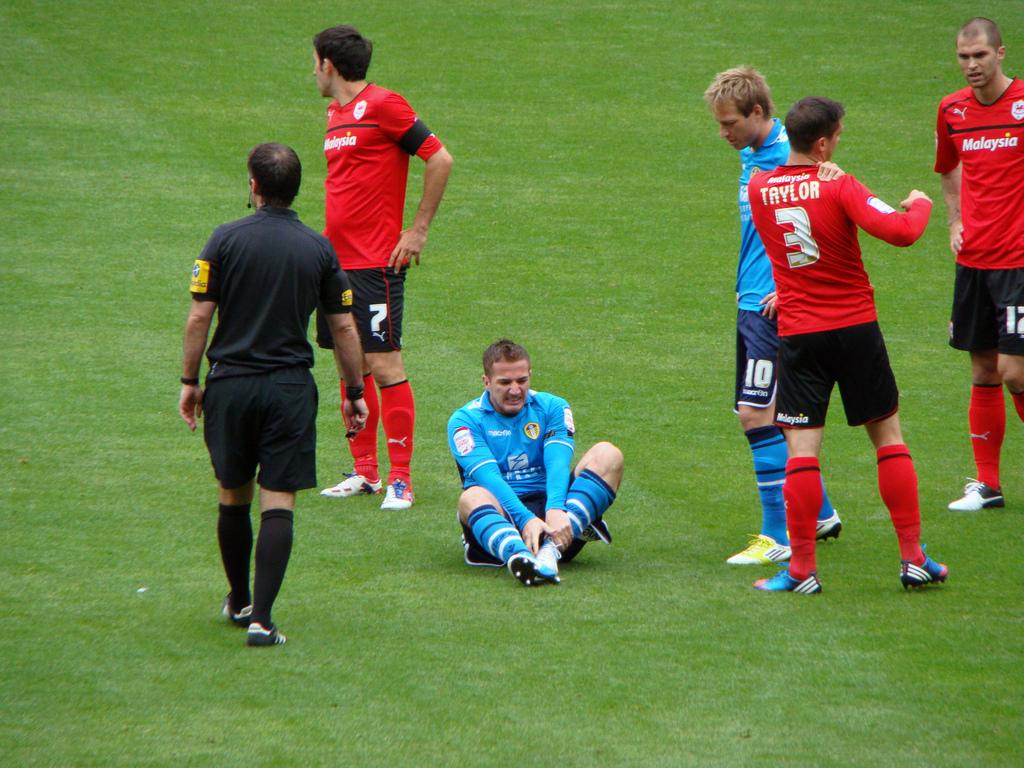 The constant twists, turns and sudden changes of direction involved in football can put the ankles of a footballer under tremendous strain. Most ankle injuries involve little more than some mild pain and discomfort, but some can be career threatening.

Playing through the pain might seem like the heroic thing to do at times, but it could put your long-term footballing future in jeopardy if you have a serious injury. There are some particularly common injuries footballers experience on a regular basis, and some are more serious than others.

The sprained ankle is the second most common form of injury suffered by professional footballers, after the hamstring strain. A sprain occurs when ligaments in the ankle are overstretched or torn.

Ankle sprains are graded according to their severity

Grade I - This is a mild sprain caused by a slight stretching of ligaments. There is usually no joint instability, and some players will be able to continue playing or training with the use of an ankle support.

Grade II - This is a moderate sprain that usually occurs because of a partial rupture of the ankle ligament.

Grade III - This is a severe sprain brought about by the complete rupture of the ligament - leading to instability in the joint.

Fast and effective treatment is required to ensure that a sprain doesn’t cause serious damage. While a Grade II sprain can often be ‘run off’, a Grade III will require compression, ice, elevation and lots of rest. An elasticated ankle sleeve will provide extra support to aid the healing process.

Footballers experience sprained ankles due to sudden impacts, falling, tripping or ‘going over’ on their ankle. The deteriorating state of municipal pitches in the UK means an increasing number of amateur players are experiencing the injury. Among the main symptoms are swelling, pain, bruising, tenderness and an inability to exert any weight on the joint.

Broken ankles are relatively common in football - most often caused by wayward tackles, or by a planted footed staying in one place while the player moves in another. Some players will break their ankle because of an awkward landing after challenging for a header, while others will simply ‘roll’ the ankle beyond the point at which the ligament can work properly.

Among the symptoms of a broken ankle are sudden and severe pain, swelling, bruising, stiffness, and an inability to walk on the joint. Simple fractures will usually be put in a cast and given six to eight weeks to heal. Antibiotics and inflammatories may be prescribed during the early days of the injury. However, if the break is considered unstable, surgery might be required.

A lot of football fans had never heard of a metatarsal injury until one nearly kept Wayne Rooney out of the 2006 World Cup. In actual fact, broken metatarsals are common amongst footballers. Although very painful, most metatarsal breaks just require rest to heal. These small bones in the forefoot are relatively fragile, and they can break relatively easily when stamped or stood on by another player. But a break can also be caused through excessive rotation or overuse.

Among the symptoms of a metatarsal break are pain in the forefoot, swelling, bruising and difficulty walking. Unfortunately, the only real course of treatment for a footballer with a metatarsal injury is immobilisation and rest. During the early stages of the injury, compression and the application of a cooling therapy will ease the swelling.

A lisfranc joint injury occurs in the midfoot, and it involves either broken bones or badly torn ligaments. The symptoms include pain at the top of the foot, swelling, bruising around the middle of the foot and pain when walking.

Lisfranc joint injuries can seem rather innocuous at first. They can be caused by a simple fall or twist, and they are often regarded as ‘low energy’ injuries. Some instances will respond to anti-inflammatories and a cooling therapy, as well as immobilisation. But severe cases - caused by a direct trauma or a high fall - may require surgery.

Footballer’s ankle occurs when ligaments or tendons in the foot become trapped between bones. This injury usually occurs in the soft tissue at the front of the ankle. The injury is most commonly caused by continuous kicking, stretching and upward bending. This thickens ligaments, and it can also lead to the bone in the ankle hitting the shin bone - causing a lump to appear.

Symptoms of footballer’s ankle include pain, which can be worse when kicking, stretching or bending the toes upwards. Some patients report hearing a ‘click’ when they move their ankle, as well as weakness in the general area. There may also be a lump at the front of the ankle.

The lump may be bone or ligament, and surgery is usually required to remove it. A period of rest and physio will follow, and a splint and crutches will be needed in order to allow the healing process to complete.
As with any injury in football, reacting quickly to what your body is telling you should minimise the game time you miss.