Do you have a structure to your pre-match warm up?  This essential preparation is often over looked – especially at grassroots.  Managers end up completing match cards or stand about talking to parents leaving the players to their own device.  It’s amazing how many players run out the changing room with a ball & what is the first thing they do?  Have a shot at goal!  Adapt your warm up to suit the age that you are working with & the conditions.

Here is my pre-match warm up. 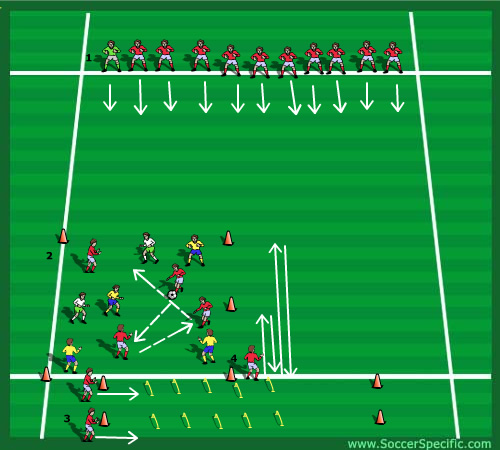 Ideal warm up before matches.

I believe it is important for players to have a routine each week before matches. I think it is silly to try & introduce something new as players will be mentally focusing in for games & there is no point trying to get them to listen to new intructions.

The basics is to get them moving & start to get their body temperature up. Obviously adapt this to suit the climate & time of year. With younger players I like them all to have a ball but ensure they don’t start bad habits like shooting at goal straight away! They should dribble around a grid, performing skills & turns. I also let them have some time for keepie ups.

Once the body & muscles start to warm introduce some stretching & light ball work. I always like introducing a small sided possession game to start getting them up to match speed.

It is very important you don’t ignore your goalkeeper. At this point I let them break off from the group & have one of my assistants warm them up. If you don’t have the luxury of an assistant have one or two of your subs warm them up or the sub goalkeeper if you have one. Although it is important they know a routine so it doesn’t turn into ‘passie-shootie in’ (although most keepers will tell them what exactly they want to do.)

Make sure players stop in between for fluids. I then introduce some S.A.Q. sessions before developing into some explosive sprints.

It’s then important to let players have some free time to complete the warm up. Some may prefer to perform some more stretching while others may wish to shoot at goal or pass in groups of 2 or 3.

Start with all players lined up along the throw-in line.

Set up a 25 x 25 yard area. This is for the possession game & you can also use one of the lines for the explosive sprints.

The coach (or possibly the captain) is at the front of the group & sets the rhythm & tempo of each exercise. The rest of the team is in line & starts along the throw-in line.

Start off at a slow jog pace, & then undertakes the following sequence;

This series of dynamic stretches are known as ‘pendulum stretches’. When working in pairs balance must be worked upon, as the one player swings to the front, the other swings to the back, in balance. This applies to the left & right also.

Players now come into the grid to play keep ball. I generally overload the attack & play 8 v 4 (I select the back 4 to start & try & win the ball, then the midfield 4). Make sure you have a number of balls to feed in when a ball leaves the grid. Players should concentrate on their work rate on / off the ball & how they receive the ball. Encourage them to ‘keep the ball’ & play ‘easy pass’.

Break up the possession game with some static stretching.

After rotating players finish off the warm up with some S.A.Q. & sprints. I would have 3 reps for the S.A.Q.;

After completing the S.A.Q., finish off with some explosive sprints, work in pairs using the outside of the grid (see diagram.);

Let players finish off the warm up with whatever they feel necessary. As each player has their own traditions, never interfere with this crucial period, as the players psychological well-being is at risk.

This is the last activity to be done before the players either return to the dressing room, or the match is about to start. I like to remind players the last important instructions & then they get into a huddle themselves. I like this as I feel it really helps to create a bond between the players.