Training without the use of football bibs.

A training session without the use of football bibs can teach your team a lot.
When children are playing football in the school playground they will naturally play without any team colours. In fact more often than not they are all wearing the same colour tops as their uniform dictates. The teams are chosen amongst themselves and they remember who is in their team. Does this encourage them to look up more, to communicate more? One would think so, as they need to compensate for the lack of team colours. One sense, sight is naturally replaced by another, sound. 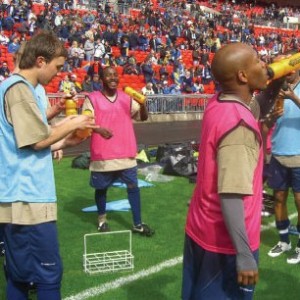 Perhaps this is something that you should experiment with at your training sessions. Set up a small sided game where the players are not distinguished by wearing football bibs. See how your team communicate amongst themselves. Do they just ask for passes for themselves or are they directing the game, giving instructions to the player on the ball.

Take this a step further with or without the use of training bibs and make it so that players can only communicate for others. For instance they cannot ask for a pass to themselves but can tell the player on the ball what other passes are on.
Get them to communicate to the player on the ball, how much time they have, whether they can turn out pass to another player etc.

Communication is an important part of football but one which young players do not start to recognise until they get into their late teens. Getting them to do this at an earlier age will give your team an advantage over their competitors.