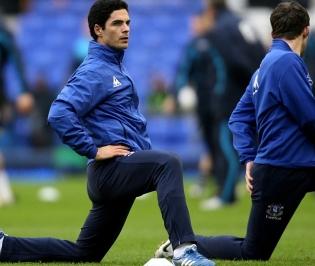 We take a look at Professional Footballers Pre-Match preparation. Use our guide to get yourself physically and mentally prepared for your next big game.

There was a time when professional footballers would enjoy a pre-match pint of Guinness in the local before a match. However, the increasingly scientific approach to the game has led to some significant changes to a player’s pre-match preparation. In order to perform at their best and avoid injury, modern-day players must take a very strict approach to their diet, hydration and physical preparation – otherwise they risk giving the opposition a significant advantage before a ball has even been kicked.

The process of sleeping releases growth hormones that have the added benefit of repairing cells and muscle tissue. The rigours of training mean that the standard 8 hours of sleep every night is essential – particularly the night before a big game. Players not only find themselves in better physical condition after a full night’s sleep, they have the extra energy that could make a key difference to their performance.
Wayne Rooney always aims to get at least 8 hours of sleep before a match or training session, but he tries to avoid putting undue pressure on himself to sleep. He aims to get to bed only when he feels ready to sleep, and that often means sleeping between midnight and 8am on a normal day. If possible, he will also try to snatch a quick nap in the afternoon to recharge the batteries.

The effects of dehydration on a player’s performance can be devastating. A dehydrated player will suffer fatigue far more quickly than would otherwise be the case, so getting fluids on board throughout the day is essential. For the best results, players will start drinking water from the moment they wake up in the morning. Sports scientists recommend drinking up to 3 litres of water before a match even kicks off, but it is important to take this amount of water in small sips throughout the day. Drinking a large volume of water just before kick-off or training can leave players feeling bloated.
While there is nothing more effective than water at hydrating the body, some players will consume isotonic drinks before, during and after a match to maintain the salt levels in the cells of their body. This can improve stamina and counteract the effects of fatigue. However, the modern-day professional footballer will usually not be allowed to consume sugary energy drinks, as they can induce a ‘come down’ once the effects of the sugar dissipate. 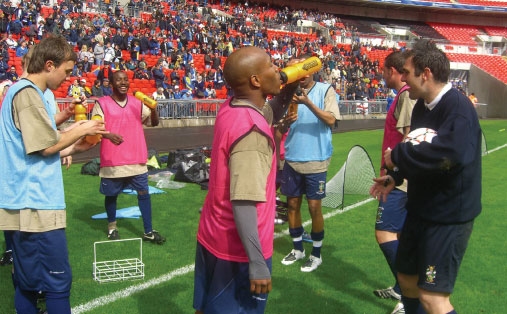 The food professional players eat throughout the week - and just before a game - is essential to their performance. The big clubs have professional dieticians who will monitor the diet of players on a daily basis. Most players will increase their intake of carbohydrates on the day before a match, and they will also eat a carbohydrate-rich meal 3 to 4 hours before kick-off – often under the direct supervision of the club’s medical staff. As a general rule of thumb, professional players will consume around 1 to 4 grams of carbohydrates for every kilogram of body weight. This gives them the energy to perform at their best for 90 minutes and beyond.
A typical pre match meal may be a large bowl of cereal with milk plus a banana or three thick slices of bread spread with thick honey, or pancakes with honey. Sports bars and fruit smoothies also provide suitable amounts of energy. 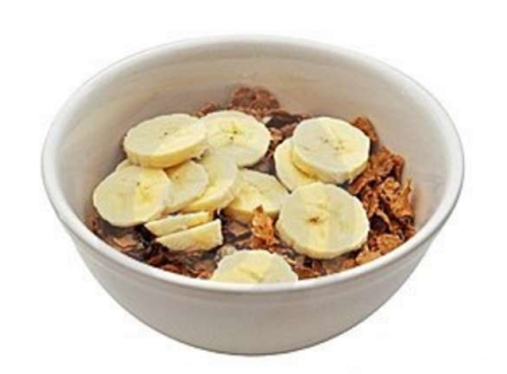 Unprepared muscles account for a significant percentage of injuries, so warming up before a match is crucial. Players will often have their own rituals, but club physios will insist on supervising pre-match stretches and massages. Physios will insist that players perform pectoral muscle warm-ups, as they can often be neglected by the players themselves. The pectorals are critical to a player’s ability to drive forward and accelerate.

As well as the obvious inspirational team talk by the manager, players will have their own ways of mentally preparing themselves for a match. This may involve a little quiet time away from other players, listening to music or performing tasks for reasons of superstition.
Pre-match rituals can vary quite significantly amongst professional footballers. Ultimately, the first team coach or manager will dictate how players prepare, but there will be an element of freedom that gives the players the chance to ready themselves in their own way. However, with so much at stake in the modern game, professional football clubs closely monitor the whereabouts and actions of their players in the run up to a match. By paying attention to every detail of preparation, the manager and coaching staff can ensure the players are completely focussed and physically prepared for the challenge ahead.