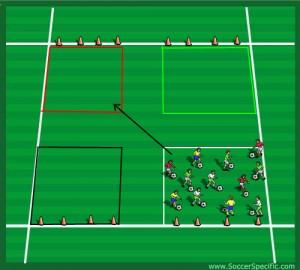 Below is another coaching drill that you can use for your training sessions. You can purchase any coaching gear required from our online store.

I took a session for a local U12 side last week.  I always prefer my sessions to run smoothly so players aren’t standing about but also that each session is based around the same theme.  Last Thursday was an awful night.  Strong winds and rain so essential that the players were kept busy and always moving.  Likewise, having your coaching area set up so players can move from one thing to the next without you having to have them stand about and take time to re-set your coaching area.  I like to see all players with a ball during the warm up dribbling, performing skills and juggling the ball.

My warm up started with all players in a 10 x 10 yard grid with a ball.  I made a further 4 different coloured 10 x 10 grids in either corner.  This concept is taken from my great Dutch friend, Bert-Jan Heijmans.  All players remained in the centre grid dribbling the ball, perfoming skills & juggling the ball.  I then performed the ‘Ronaldo 7′ which is 7 different skills performed while the ball is stationary.  The idea is that your feet is furthest away from your brain so through repetition will lead to improvement on speed, reaction and the idea of performing skills on the pitch ‘without thinking about it’ or if you prefer, instinct.

I then worked on a spatial awareness game.  I had 16 players in the centre zone so I wanted them to react on my whistle and dribble at speed to either of the 4 outside grids.  If done correctly we would have 4 players in each grid.  The players had great success from this.  You can also operate a number of  ‘mini games’ within each grid like ’3 v 1′ or ‘Ball Hunter’.

My diagram below doesn’t exactly show what I have explained as it is another variation on my session.  If you add another grid in the middle and obviously base on the idea that the players will be split equally amongst the grids. Great game if you are on your own as a coach or waiting for another group to finish before your allocated time meaning no set up time or little preparation.

Start the session inside a 10 x 10 yard grid using all the same colour of cones (although in my diagram you can’t see this the grid should appear in the middle with the other 4 grids on the outside.) All players have a ball & dribble around. While the players are doing that set up another 10 x 10 yard grid alongside it, but leaving a 10 yard safety area. This time use a different colour of cones.

This is an excellent session for players to improve their decision making & getting their head up.

It is essential to plan and set your session up so that it runs smoothly and players aren’t standing about getting cold, distracted & bored!

I wanted to work on 1 v 1′s and continue the theme of dribbling, skills, turns and work at a high tempo.  My next session was easily combined into the set up from the first part of my session.

With having 4 grids set up on the outside all I had to do at the start of the session was leave a couple of extra cones down in each grid for the mini goals.

Players then worked in their groups of 4, playing 1 v 1.  This in turn kept the high tempo but also allowed enough recovery for each player.

Having mini goals on either side of the grid insures players can change direction to beat & fool the defender.  Although if the defender should gain possession they then become the attacker.

Rotate players so that everyone has an opportunity to play both as an attacker and a defender.  I named the session after PSV as I viewed it at their Academy! 1 v 1 duel, beat the defender with a move at speed.

This is a simple session that I viewed at the PSV training ground.  The Academy played this at a high tempo.

Don’t have long lines although work in groups of 4-5 players per grid so each player receives a recovery period.

Set up 10 x 10 yard grids with a safety area between each one.

Players should position themselves at the top of the grid in the centre facing the defender at the bottom of the grid.

Mini Goals should be placed on either side of the grid.

Defender starts with the ball (red player).  They make a firm pass to the attacker (yellow player).

The attacker should meet the ball & both players come to the middle of the grid.  The attacker performs a skill & attacks one of the goals while the defender applies pressure.

Encourage the attacker to be brave, perform a skill & play at speed.  They should also be patient & if they cannot score in one goal look to switch & attack the other goal.

I am always keen to take what is learnt in the technical session into a tactical themed game.  I thought the 5 goal game was perfect as it encourages spatial awareness with changing the point of attack.  The scoring system encourages 1 v 1 and dribbling as a player dribbling through the gates receives a goal.  It also combines team play & passing.  If a player passes to a team mate they receive 2 goals and to encourage movement and support the team is awarded a bonus goal for a 1-2.

I had 16 players so I played 5 v 5 + a neutral player (i.e. they play with the team in possession making it 6 v 5).  To keep all players active and not to over crowd the pitch I played another team of 5 as wall players.  They were spread around the outside of the pitch and were restricted to 2 touches and couldn’t be tackled but had to play at speed.  They could move up & down but not allowed to enter the playing area.  I played roughly 5 minutes a match with every team taking a turn as wall players. Possession & combination game focusing on changing the point of attack.

2 equal teams play on half a pitch.  5 mini goals / gates are set up within the area using poles or dome cones.

You can adapt the size of the area & the amount of mini goals set up to suit your group.

Players are not allowed to score back-to-back goals in the same gate.

I finished with small sided games with no restrictions (again I rotated the teams but the resting team played as wall players to stay active).  Apart from some encouragement, praise and lighted heartedness let the kids play – they listen to us coaches enough!