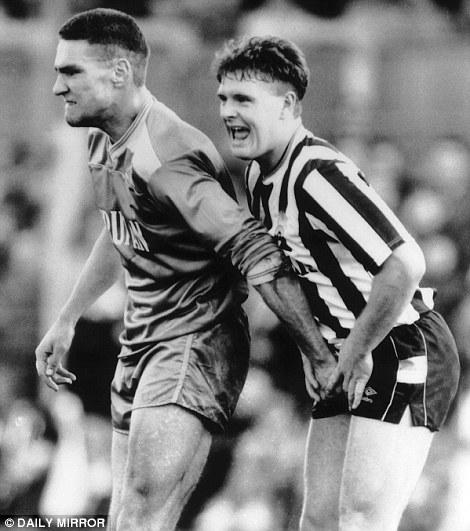 Since its Halloween, I thought it was a good time to share with you who I think are football’s scariest ever players. I know that I wouldn’t like to come face to face with most of these players on the pitch.

Here is my list of the meanest football players, hope you enjoy.

You wouldn’t think the fella Mackay is grabbing the scruff of is fellow hard man, Billy Bremner. You might have also spotted a young Terry Venables… This happened 43 years ago when Tommy Smith kicked the referee after getting beat by Inter Milan in the European Cup.

I would not like to have been this referee with a screaming Keane coming after me! Roy Keane was also known for that horrific tackle on Haaland. Now this was one scary moment in 2011, there seemed to be pure hatred in Gattuso’s eyes when he first grabbed the throat of Joe Jordan and then head-butted him after the game. We can’t have a list of the scariest footballers without Vinnie Jones being on it. This is the iconic moment when Vinnie grabbed Gazza by the unmentionables! Another strangulation moment comes from good old Duncan Ferguson. This however seems a lot more meaningful than Gattuso’s attempt. Do you know what makes this moment even more scary?... Ferguson is actually wearing the captain’s armband! Joey Barton seems uncontrollable with even having spent time in prison for fighting. He has picked fights with the likes of Balotelli, Westwell, and Gervinho. Eric Cantona was known for his antics on the pitch but was mostly known for this god-awful moment when he physically fly kicked a Crystal Palace fan in the crowd. This genuinely looks like it’s meant to be a Halloween costume. It is in fact Terry Butcher with a head injury during a 1989 world cup game against Sweden. After getting a deep cut to his forehead, Butcher still played on whilst blood was gushing down is front… crazy! Is it Bruce Lee? Jackie Chan?... No it’s Nigel De Jong! Here is another fly kicking episode only this time it is De Jong kicking Xabi Alonso right in the chest… Ouch! What makes this tackle different is the fact that Davies said to the media prior to the game that he was going to injure Manchester United players. He’s not the brightest spark is he? Here is ex-Arsenal captain, Patrick Vieira (yes that right… another captain), having a fight with fellow hard man, Roy Keane. Have I left someone off the list? Let us know by leaving your comments or by tweeting us @TheSoccerStore.

You can also find us on Facebook and Google+.