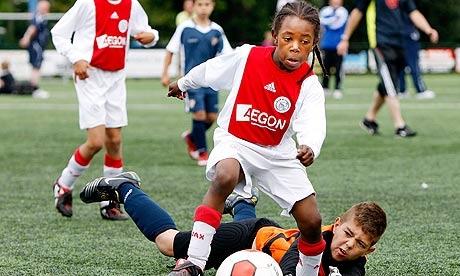 Most English football fans are in agreement; they want a successful and competitive England team to cheer on at the major international tournaments. They want to support a team that has a genuine chance of glory. However, a lack of first-team opportunities at the highest level, coupled with falling technical skills, has left the England team facing a future as one of the also-rans of world football. It seems that drastic action is needed to guarantee a brighter future for the England team, and it should start with how our kids are being coached.

One of the great strengths of the Dutch approach to coaching is its openness. The relationship between the professional and grassroots game is far closer, and that culture is cultivated at all of the major clubs in the Netherlands. PSV Eindhoven, for instance, has direct links with several grassroots clubs in the local community. Professional coaches often visit youth teams and offer quality coaching sessions completely free of charge. They also work with grassroots coaches in order to lift coaching standards throughout the area – something they believe will result in a conveyor belt of emerging talent in the future.

Young local players and coaches are invited to academies on a regular basis, so they get a feel for exactly what skills and attributes are needed to make it as a professional. First team coaches are also open and approachable – providing help and advice for any young player who wants it. This inclusive approach to nurturing local talent has allowed the Netherlands to punch well above its weight in footballing terms for many years.

However, the biggest difference in coaching culture to that in the UK involves how the academy players are managed. Kids are picked up at their homes by club transport in the morning. They are taken to the training complex, and then on to school. This allows every young academy player to work on technique and control twice a way without missing any school. At Ajax, they combine training and schooling in the same complex.

Portuguese clubs hammer home the basics of technique and control from the age of five. Instead of playing competitively on oversized pitches, their kids are repeatedly practising their passing and touch. There is also a culture of inclusiveness when it comes to parents. Mums and dads are welcomed at training sessions, and clubs will often offer advice for parents on diet, fitness and mental attitude.

However, unlike in England, there is a no-nonsense approach to pushy or particularly vocal parents watching from the sidelines. Youth football across England is blighted by aggressive parents who take it upon themselves to get involved in matches and training sessions. In Portugal, however, such interference from a parent results in their child’s substitution. This is common throughout the country, so there are very few problems.

Sam Allardyce swears by it, and it could be a way of identifying the coaching needs of individual youth players. Performance analysis involves scrutinising statistics such as successful pass percentages, goals to shot ratios and possession stats. Coaches can use the latest software to attribute raw data to developmental needs among their players. For instance, a midfielder with a lower successful tackle percentage than other players in his position may need some one-on-one coaching in that particular area. While some believe this scientific approach betrays the essence of the game, there is no doubt that its use is on the increase.

Dutch and Spanish teams in particular have always adopted a coaching ethos that places great emphasis  on ensuring players are living a healthy, happy and productive life.

For English clubs, this may mean organising more team-building events that help young players with their communication and cooperative skills. It may involve providing counselling sessions for players with personal problems, or it could mean building social skills through local community projects.

The very best young players in the world aren’t in that position solely because of their raw talent. They usually have stable backgrounds, a healthy lifestyle and the social skills required to succeed in the modern game.

Patrick Veira has been openly critical of English youth coaching methods in the past. He believes that from too early an age, our kids are being coached in order to simply win the next game. This short-term approach doesn’t leave enough time for development, and for young players to learn from their mistakes. Veira believes that the need to win overrides player development, which is the real reason for the dearth of young talent in English football. He may have a point.

It is obvious that there is a serious structural problem with our coaching system in England. Simply to blame the failures of the England national team on too many foreigners playing in the Premier League will not address the real problem: our young kids are simply not good enough at the moment. It may take one of these bold approaches to coaching to reverse this alarming trend.