Is the crisis in grassroots football threatening the future of the game? 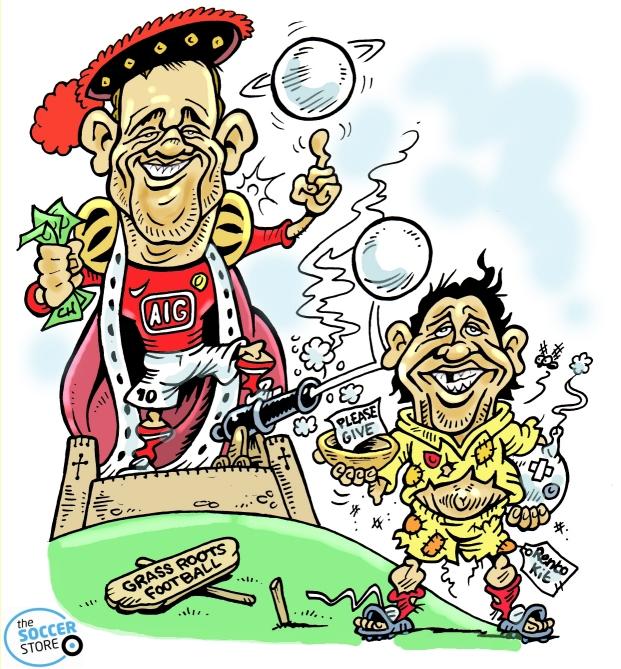 As transfer fees in the Premier League’s latest transfer window soar above £100 million once again, grassroots football throughout England seems to be struggling more than ever. Despite pledging 5 percent of its income to the grassroots game, the Premier League’s contribution has fallen to less the one percent in recent years. Moreover, the FA and central government have almost halved investment in community football projects during the last 5 years. Is this an inevitable part of the modern game? Or should the government and the football authorities being doing more to nurture the talent of the future?

A day of protests recently took place on playing fields and community pitches up and down the country, culminating in a gathering of around 300 coaches and youth players on a wind-swept football pitch in Liverpool. Rotting changing rooms and quagmires for pitches are now commonplace all over the UK, and it seems that those managing the grass roots game have finally had enough.

Similar protests took place in Birmingham, London and Newcastle, with more than 90 percent of matches being boycotted over a single weekend. Whether these protests will lead to lasting change is a moot point, but it is clear that the future of the lower leagues is in real danger. With councils raising pitch fees by as much as 300 percent in some areas, it seems that only a significant investment from the Premier League and the FA can secure the lower echelons of the national game for future generations to enjoy.

In many areas, councils are trying to increase revenues to account for cuts in funding from central government and frozen council tax rates. However, there are some who believe that the steep increases in pitch fees are underhanded attempts at forcing local clubs out and bringing potential lucrative developers in. Whatever the reasoning behind these astronomical increases in fees, hundreds of local clubs are closing or facing extinction as a result.

Perhaps the stance being taken by councils is understandable, given the current austerity measures being endured throughout the UK. However, what is difficult to understand is the FA’s inaction amidst the greatest crisis in the grassroots game since the birth of association football itself. The Premier League is arguably the most exciting league in the world, and its future is almost guaranteed. However, the FA’s biggest product is the English national team, and the current crisis could have a direct impact on the senior squad in 20 or 30 years time. Why aren’t they doing more to avert the crisis and secure the future of their biggest asset?

Kenny Saunders of Woolton FC in Liverpool has quickly become the face of the nationwide protests, and he has attacked the problem from both pragmatic and emotional angles. He understandably fears for the future of the national game, as a smaller pool of players will inevitably lead to a drop in talent. Where is the next Steven Gerrard or Wayne Rooney going to come from if there is nowhere to play? How will the major clubs’ academies spot talent if the third-world conditions of some footballing facilities are keeping kids in their bedrooms playing computer games?

Kenny Saunders also believes that there is a community angle to this crisis. Particularly in the more deprived areas of the country, local teams are the heartbeat of the communities they serve, and in many cases, the only thing keeping kids from crime and drugs. Allowing pitches and facilities to rot is demoralising entire neighbourhoods, and the consequences could involve higher crime rates, higher youth unemployment and an increase in social cohesion problems.

Indeed, Saunders’ own club Woolton FC are a prime example of the crisis facing grass roots football. Endorsed as an FA charter standard community club, Woolton FC has its headquarters in a converted shipping container. A modest collection of boots, footballs and nets is stored in the dilapidated tin box, which doubles as changing rooms for both boys and girls. With no toilets or heating, the decaying facility is perhaps a powerful symbol for the protests. At a cost of over £700 million, the new Wembley was the FA’s crowning achievement – evidence of the commercial success of a game they invented. However, perhaps a more apt symbol of the FA’s competence is the image of shivering children squashed into a disgusting club facility that isn’t fit to keep animals in. (Sky Sports Interview with Kenny Saunders)

St George’s Park – the FA’s multi-million-pound training and development centre – was lauded as a state-of-the-art facility aimed at improving standards and cultivating the stars of the future. But with participation in grassroots football at an all-time low, where is the FA going to find the players to develop there?

The facts are clear; without urgent and sustained investment in community football projects, the English national team faces a future in the third tier of the international game.

The Prince and the Pauper[/caption]