Funny Football Quotes That Will Bring Back Memories 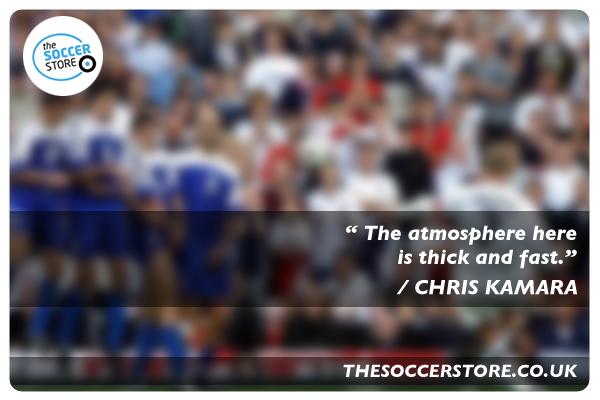 Funny Football Quotes That Will Bring Back Memories

We all love sitting down on the couch on a Saturday afternoon with Sky Sports News on watching Jeff and the gang get unbelievably excited when something happens like a “GOOOOAL!” or a sending off.  Even better is watching Match of the Day on a Saturday night with Lineker catching up on the highlights and the manager and player interviews. What make this even more great is when someone says something incredibly stupid, outrageous, or downright unforgivable!

If like me you were watching Monday Night Football with Jamie Carragher and Gary Neville as pundits, you would have been quite literally laughing out loud with some of the banter that was going on. Carragher went up in my ratings as a pundit when he came out with this funny football quote – “No one wants to be a fullback as a kid… no one wants to grow up to be a Gary Neville.” Luckily enough Neville laughed it off as did the presenter and in fact couldn’t stop laughing till they went to the advert. I myself was nearly crying with laughter and have watched it back a few times.

Wenger is the manager of Arsenal and has been since 1996. He is known for stressing the importance of diet and nutrition in football and hardly ever does interviews… now we know why. "If you eat caviar every day it's difficult to return to sausages." - Arsene Wenger Quote

Venison played for Liverpool from 1986 to 1992 and played for other teams also including Sunderland and Newcastle. "We didn't underestimate them. They were just a lot better than we thought." - Sir Bobby Robson Quote

Kammy is the king of funny football quotes. He played for Brentford from 1981 to 1985 and played for other teams including Swindon Town and Portsmouth. He then went on to manage Bradford City from 1995 to 1998. He is now a well-loved presenter and pundit on Sky Sports. He is well-known on the Soccer Saturday for his highly excitable nature, tendency for funny blunders and propensity to come out with strange sayings that confuse host Jeff Stelling and the other studio pundits. "The atmosphere here is thick and fast." - Chris Kamara Quote

David Pleat played for Luton Town from 1964 to 1967 and played for other teams such as Exeter City and Peterborough United. He then became the manager of Luton Town in 1978 where he remained for 8 years. He was also commentator on ITV and co-commentator on other broadcasts and was known for his funny football quotes. "We are now in the middle of the centre of the first half." - David Pleat Quote

George Weah played for Milan from 1995 to 2000 and played for other teams including Monaco and Paris Saint-Germain. He is now a Liberian humanitarian and politician and ran for presidency in 2005 but was unsuccessful. Since he is now a politician, you would have thought he would be the last person that would make a funny football quote but here he is. "It can't be Sunday every day. There are also Mondays and Tuesdays." - George Weah Quote

Hoddle played for Tottenham Hotspur from 1975 to 1987 and played for other teams including Monaco and Swindon Town. He then became the manager of England from 1996 to 1999. "OK, so we lost, but good things can come from it; negative and positive." - Glenn Hoddle Quote

Ollie played for Bristol Rovers from 1980 to 1985, 1987 to 1991, and 1996 to 1999 and played for other teams including Queens Park Rangers and Brentford. He is now the manager of Crystal Place and has been since 2012. He has a reputation amongst football fans for his Bristol accent, bizarre interviews, funny answers to questions from the media, and funny football quotes. Motty was a football commentator from 1971 to 2008 but still does commentary for Match of the Day. He made his debut FA-Cup Final as a commentator when the infamous David Coleman (or Colemanballs), the previous king of funny football quotes, was in dispute with the BBC. "The referee is wearing the same yellow-coloured top as the Slovakian goalkeeper. I'd have thought the Uefa official would have spotted that - but perhaps he's been deafened by the noise of this crowd." - John Motson Quote

Merson played for Arsenal from 1985 to 1997 and played for other teams including Aston Villa and Walsall. He then became the manager of Walsall from 2004-2006. He is now one of the pundits on Soccer Saturday and is often the target of friendly banter from Jeff Stelling and other members of the panel for his grammatical inaccuracies. These grammatical inaccuracies are what lead to some of his funny football quotes. "Scoring goals is the hardest thing in football, but doing it in a struggling team is double harder." - Paul Merson Quote

Trevor Brooking played for West Ham United from 1967 to 1984 and played for other team including Cork City and Blue Star. He then went on to manage West Ham United in 2003. He is now the Director of football development in England so he may want to keep those funny football quotes at bay. "It's end to end stuff, but from side to side." - Trevor Brooking Quote

What is your favourite funny football quote and who said it? Let us know by leaving your comments.