Why is Futsal Growing in Popularity? 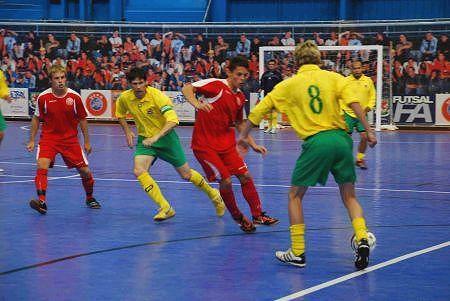 The game of futsal is enjoying a prolonged period of growth in Europe and most of the world’s footballing nations. This shortened, five-a-side version of the game is played indoors, with each half lasting only 20 minutes. Packed with action, incident and lots of goals, futsal matches are guaranteed to deliver entertainment and spectacular skills. But why has futsal become so popular in such a short space of time? And what does the future hold for one of the fastest-growing participation sports in the UK today?

One of the main reasons for the sudden growth in the popularity of futsal is the fact that it helps players to develop their touch and control. Smaller pitches, fewer players and a distinct lack of space force participants to constantly search for space, improve their passing accuracy and concentrate on staying in possession of the ball.

The best futsal players are alert and ready for the ball at all times. They are highly creative, and they can improvise to create chances out of nothing. These are all highly desirable skills and attributes in the modern game – especially at a time when players in the UK are being criticised for their lack of technique.

A Reminder of Simpler Times

Football has historically been a game played on the beaches of South America and on the streets of Europe. The dimensions of Futsal, and the ability to use the surrounding walls for improvised passing and dribbling, makes it similar to the most primitive form of the game, and it seems players and spectators alike have warmed to this particular aspect of futsal.

Futsal has been hugely popular in South America since the early 20th century. Indeed, the first Futsal World Cup was held in the Brazilian city of Sao Paulo in 1982 – a tournament that the hosts won comfortably. The shortened version of the game has shaped many of the greats in Brazil, including Pele, Ronaldo and Zico. These players, and hundreds more like them in South America, perfected their skills playing various versions of futsal on streets and beaches, which is why an increasing number of professional clubs in the UK are implementing the game as part of their weekly training regimes.

A Growing Fan Base Around the World

Of course, there are many variations of futsal, and different countries, clubs and associations have adapted the basic principles of the game for their specific needs. Spain, for instance, developed the famous ‘Tika Taka’ style by implementing futsal into everyday club training programmes. The philosophy of using limited space, remaining in control of the ball at all times and constantly looking for opportunities has served the national team very well over the last decade.

India was recently the venue for the inaugural T-20 Football tournament, which was based on the basic principles of futsal. The likes of Fernando Torres, Frank Lampard and Didier Drogba took part in cities all over the country. Sponsored by Pepsi, the event clearly demonstrated the commercial potential of the game.

In the UK, the Masters Football competition is based on the rules of futsal, and it has attracted lucrative sponsorship deals and television coverage from SKY TV. Current and former professional players represent clubs they have played for during their professional careers, and the competition has grown in stature and prestige over time as a result. The success of Masters Football in the UK is yet another indication of the commercial benefits that futsal can deliver - with the right backing.

How to Get Involved

Although the Indian T-20 and British Masters Football competitions are loosely based on futsal, the official game is a non-contact sport. A specially designed futsal ball with around 30 percent less bounce than a standard ball is used, and each team plays with five players – although up to seven substitutions can be made without the need to halt play. A smaller size Futsal Goal measuring 3m wide by 2m high is used instead of the standard 5-a-side goal.

The Football Association in England is serious about using futsal as a developmental tool, and its National Futsal League has been created with the aim of improving standards and participation levels up and down the country.  The FA is also actively promoting this shortened version of football to players of all experience and skill levels through a dedicated futsal website. Players in Scotland can get involved by contacting the Scottish Futsal League.

At a time when young British players are being criticised for a lack of control and technical ability, the game of futsal can be used as a fun and relatively safe way of developing those attributes throughout a player’s development. With an increasing number of professional clubs implementing futsal into their daily training regimes, it seems that the shortened version of the game is here to stay.