What Does the Future Hold for Women's Football? 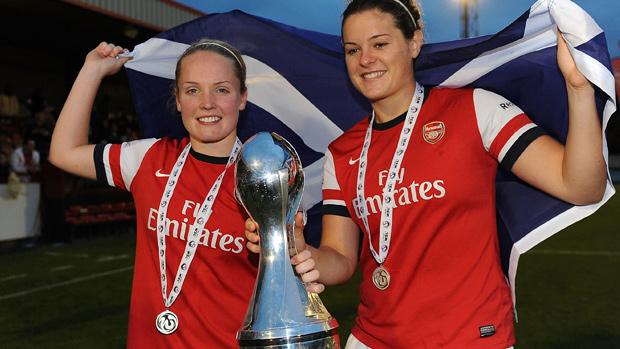 Whilst the vast bulk of the FA’s grassroots investment it devoted to the men’s game, there is a growing feeling that women’s football deserves a larger slice of the pie. A year after the Women’s European Championship was aired live on the BBC, participation levels at grassroots level are still growing. But can the ladies’ game continue to grow at a time when the men’s game is already so badly under-funded? And can the professional game finally garner the recognition it deserves?

The London 2012 Olympics was a huge success for the women’s game. Whilst the headlines centred on the high-profile omissions from the men’s team – and the absence of any Scottish players – the ladies went about their business with professionalism and a steely determination. After making it to the quarter finals, Team GB pricked the interest of the movers and shakers at the FA, and a new initiative to grown the women’s games was given the green light as a result.

The FA devised a five-year plan to make the women’s game the second most played team sport in Britain. As part of this audacious plan, £3.5million was ploughed into an Elite Performance Unit, and funds were made available to create a comprehensive commercial strategy designed to attract lucrative TV rights deals. The FA also pledged to expand the growing Women’s Super League. Not only is women’s football now being taken seriously by the average fan, it is finally getting the infrastructure, logistical support and funding it so desperately needs – but not nearly enough.

Of course, every sport needs regular exposure in order to attract sponsorships and grow a large and dedicated fanbase. Thanks to some support from the BBC, it seems that exposure may now be secured – in the short term at least. The Beeb has committed to airing exclusive coverage of England Ladies’ World Cup qualifying matches. And perhaps more surprisingly, a weekly highlights show featuring WSL matches has been promised – airing on BBC Two and the BBC News Channel.

Like so many sports, women’s football received a much-needed boost as a result of the London 2012 Olympics. For the first time, a mainstream audience was treated to a brand of football that has been flying under the radar for decades. And make no mistake; the BBC’s decision to pick up the rights to the England national team games and the WSL was not made on the basis of goodwill and politics. The BBC rewarded the women’s game with a broadcast deal based on the viewing figures and positive feedback the British women’s team received during the London Olympic Games.

It seems that there is now a natural momentum behind women’s football in England that isn’t contrived or reliant on political correctness. People want to watch the game, and they’re willing to pay for the privilege. BT has signed a deal with the WSL to be the home of the most prestigious domestic competition in the ladies’ game. BT is also an official sponsor – providing a huge cash boost to a sport that has been starved of funds for decades.

Despite this incredible progress in such a short space of time, the women’s game is still the impoverished little sister of the men’s game in England. As part of the FA’s new-found commitment to women’s football, centrally contracted players in the England squad recently received a pay rise of £4,000 – taking their annual salaries from £16,000 to £20,000. This may seem like small change when compared to the riches of the Premier League, but in percentage terms (and in terms of symbolism), it is huge.

The Premier League is now interested in the ladies' game

Of course, a successful England ladies’ team relies on a successful Women’s Super League, and that is something Premier League chairmen are now taking seriously. Arsenal and Chelsea have ploughed significant funds into coaching, facilities, pitches and infrastructure for their ladies’ teams, as they start to notice the growing commerciality of the women’s game. However, the most impressive commitment since the London Olympics has come from Liverpool FC. As well as investing hundreds of thousands in coaching staff and world class facilities, the Liverpool board has invested in a new 13,000-seater stadium for their women’s team. And there have been mixed training sessions involving the ladies and Brendan Rogers’ first team players.