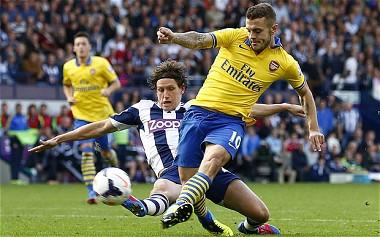 Arsenal have been on such a high the last few games that it comes as no surprise that they felt a little hurt yesterday when struggling against the pushing West Brom team. But never fear… Wilshere is here! Jack Wilshere managed to score a winning goal for Arsenal to take them back to the top of the premier league table. Arsene Wenger’s team seemed to be so close to having the same outcome as Manchester United last weekend when they faced West Brom. To be fair West Brom was looking good on the field and never gave up trying to break Arsenal. Steve Clarke’s side were definitely on a high themselves after beating Manchester United at Old Trafford last weekend for the first time since 1978.

It looked like West Brom had broken down the Arsenal team when Claudio Yacob scored the first goal minutes before the half time whistle. Arsenal were looking at getting 11 consecutive wins before the West Brom game so you could see players heads drop walking through the tunnel at half time. Wilshere seemed especially frustrated at having been played out of position and didn't look the same when having a touch on the ball.

Olivier Giroud, whose in my Barclays fantasy football team, wasn't looking too bright after his usual sense of control seemed to have gone out of the window, much to my disappointment. It took a good while for Arsenal to find their usual wining form.

It wasn't just Giroud that West Brom was trying, but also Mesut Ozil. Ozil’s usual elegance on the ball was looking a bit frantic with West Brom’s attack being relentless. I am really enjoying watching West Brom lately and I am sure many others are as well, especially Man City and Liverpool fans.

I think Arsenal got pretty lucky last night with Wilshere’s goal deflecting off Jonas Olsson and Anelka missing two very good chances. Arsenal started to pick themselves up after being knocked down by West Brom, especially Wilshere who increasingly bettered himself as the game went on. After being moved to the right wing after playing on the left, Wilshere’s game improved massively.

Saying that, Wilshere looked a little lost as we all know he would much rather be playing in a more central role. However he never let that stop him from scoring the winning goal to take Arsenal back to the top of the table.

This year’s league is really exciting to watch as almost all teams feel they could in for a chance to either win the league or be in the four. The question is… who is your money on?