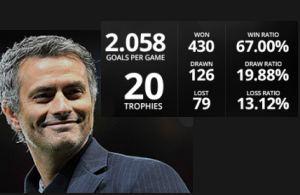 Jose Mourinho certainly made an impression at Chelsea during his last stint there with 2 Premiership Titles and an FA Cup win. Since his departure in 2008 he has won the Champions League with Inter Milan and various silverware with Real Madrid.
Love him or hate him he is sure to be entertaining in the forthcoming football season. Our infographic outlines all the facts and figures associated with Mouinho.