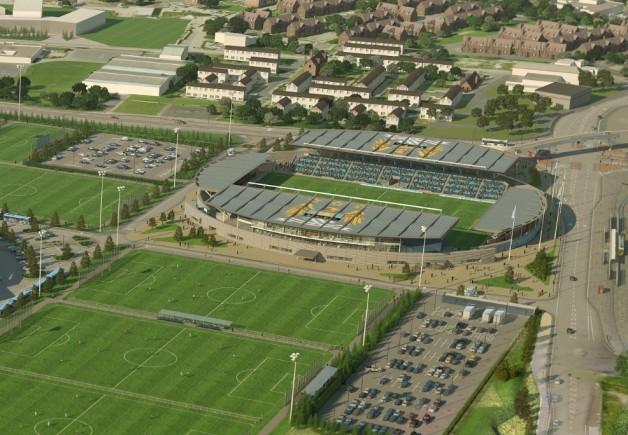 The bridge recently lowered into place - which connects Manchester City’s Etihad Stadium with its new £200 million academy complex - it's bridging a big gap in more ways than one. This impressive structure literally links the multi-million-pound superstars of City’s first team with the junior and youth teams. And it proves that even the richest football club in the world hasn't given up on the grassroots game. As the FA’s Elite Player Performance Plan continues to garner criticism from all quarters of the game, Sheikh Mansour, Patrick Vieira and the City board clearly believe in the young English talent that surrounds them. This extensive academy is not just a facility for youth players to learn their trade; it is a world class centre of excellence which is the size of a village – and it could secure City’s status as a global brand long after Mansour loses interest in his latest play-thing.

While work is still ongoing, it is hoped that the new 80-acre facility – which sits adjacent to the Etihad Stadium – will be up and running by the beginning of the 2014-2015 season. And once the whole development has opened, it will be the most impressive club training facility anywhere in the world.

Included in this massive project are 16 full-size pitches, as well as a half pitch for dedicated goalkeeping training. There is also a 7,000-seater stadium for the youth team to play their home matches. This will provide youngsters with a unique insight into what it takes to perform in front of a large crowd - which should help to create more rounded, battle-ready academy players who can push for first-team spots more quickly than at present. What is really telling, however, is City’s decision to reserve 12 of the training pitches for 8 to 21-year-olds – clear evidence of the club’s commitment to local talent.

First-team players will be treated to world-class facilities in an elite training facility. Among the myriad of features planned include a state-of-the-art sports clinic – which could also serve the students at the 6th Form school that is planned for the second phase of the development. And the entire training base will be connected to the Etihad by a huge bridge that crosses Alan Turing Way.

The City board is keen to make this facility something that the whole community can be proud of. As well as redeveloping what was industrial wasteland, the academy will also be one of the most environmentally friendly in the world. The final stages of the scheme will involve the planting of more than 2,000 trees, which will transform a former eyesore into the world’s premier football training complex. And if all that isn’t impressive enough, the Blues have donated £3 million to the local council for the building of a new leisure centre on the site.

With a range of facilities available to the general public, a sports science institute and dedicated youth training facilities, it seems that the future of the England team could be in the hands of Manchester City. It is the club’s ambition to field an entire team of home-grown talent by 2027, and while that may sound fanciful, no other club is in a better position to make that happen. The club has had its application for a 14,500-seat expansion of the Etihad granted by Manchester City Council, and the team goes from strength to strength on the pitch. These are indeed exciting times for Man City fans.

While many clubs and their fans will look on this exceptional football training complex with envy, it could be something that all fans of the England national team can rejoice over. It has proved that, despite the enormous amounts of money in the game and the growing gap between the haves and have-nots of football, it is possible to look after the elite and grassroots ends of the football spectrum at the same time. One doesn’t have to come at the expense of the other. In fact, they are better when they work together for the good of the game.

To put this development into some perspective, the upper end of the estimated bill for the project is £200 million – just two and a half times what Real Madrid paid Tottenham for Gareth Bale.