Is Safe Standing at Top Football Matches a Realistic Prospect? 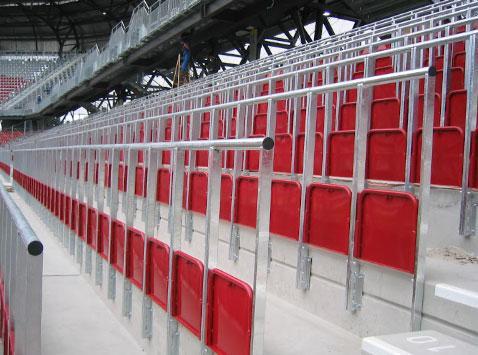 The heartbreaking images of Liverpool fans being crushed on the overcrowded terraces of Hillsborough Stadium in 1986 are engrained on the collective conscious of the entire English nation. This was a disaster that transcended sport, and it brought football fans of all persuasions together in a way that had never been seen before.

The enormous scale and impact of the disaster was unprecedented, and it still remains in the news today – 25 years after the tragic event. One of its lasting legacies is a ban on standing at matches in the top two divisions of English football. But can a recent campaign and some new technology pave the way for standing in football stadiums once again? What is the Safe Standing Campaign?

Since 2002, the Football Supporters’ Federation has been promoting the Safe Standing Campaign with passion and a coherent voice. The movement has garnered support from many of the Premier League’s clubs – including Manchester United – and it has been officially endorsed by leading British MPs. Through a concerted campaign of lobbying, petitioning and high-profile endorsements, awareness of the issue has spread quickly over the last decade, and there now seems to be growing support for a limited return to standing areas.

But there is still a long way to go before we’ll see English fans standing for Premier League and Championship matches. Perhaps the greatest hurdle of all will be securing the political support required for a change in the law. A 1994 amendment to the Football Supporters Act 1989 prohibited standing areas in the top two tiers of English football. Overwhelming government support is needed to initiate a change to this law, but the UK government recently stated that there would need to be irrefutable evidence of “very clear demand” for a return to standing from all the relevant parties. As one of the relevant parties is the police, a change in the law may still be some way off.

While Manchester United has publicly stated its interest in assessing the latest safe standing technology, it has stopped short of officially endorsing it. However, Bristol City is one of the first professional clubs to offer the Safe Standing Campaign an official endorsement. There have been limited trials of so called rail seats in some Scottish Premier League grounds, and Aston Villa has made clear its willingness to trial such a system at Villa Park.

What Are Rail Seats?

Rail seats allow clubs to switch areas of their stadium between seating and standing areas. A sturdy guard rail at chest height stops the user from falling forwards, but a fold-away seat can be unlocked by the club in order to turn the rail into a seat. And unlike the traditional, pre-Hillsborough terracing, each standing spot is ticketed in the same way as a seat currently is.

There is now a genuine argument for a return to limited standing on the grounds of safety. A common theme in stadiums up and down the country involves large sections of a crowd standing for the duration of a in seating-only areas. Indeed, this is now the norm for many travelling fans in the Premier League. This not only impedes the enjoyment of people with physical disabilities and those who wish to remain seated, it poses a serious health and safety risk, as there is nothing to prevent those fans falling over the seat in front of them.

What Does the Immediate Future Hold for the Safe Standing Campaign?

The Safe Standing Campaign is undoubtedly gaining momentum, and according to a recent article on The Independent website, it has the support of the majority of Championship clubs. However, the impending Hillsborough Inquiry - and the continuing furore over cover-ups and alleged police corruption - means heavyweight political support for a change in the law remains some way off.

Of course, there are vehement objections to a change in the law in Liverpool. The Chair of the Hillsborough Families Support Group Margaret Aspinall recently declared her outrage at growing support for the Safe Standing Campaign at a time when victims’ relatives were still fighting for justice. And despite the successful use of standing areas in several German stadiums, it seems that top English stadiums will remain all-seated arenas for the foreseeable future.

It is going to be difficult to argue the case for standing areas at top football matches while the spectre of the Hillsborough Disaster looms large. But once the truth has been revealed, and people finally find the closure they’re looking for, the Safe Standing Campaign may finally have its day.