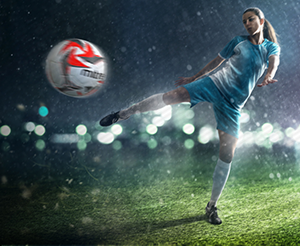 Futsal - the only version of 5 aside football which is governed by FIFA. It is the fast paced game that involves a lot of technical ability, teamwork and close ball control.

In the 1930s two types of small sided football games were being played in South American countries such as Brazil and Uruguay. In Uruguay a development of the 11 aside outdoor game, was moved indoors so that it could be played in Youth Clubs to get young people involved. In Brazil, a similar game was played on the streets, which then lead to the publishing of the first rules of the sport in 1936.

As Futsal became popular throughout South America, a governing body to support the growing sport was required. In 1971 in Brazil, The International Federation for Futebol de Sala (FIFUSA) was officially founded and in the same year the first FIFUSA World Championships were held in Sao Paulo, Brazil. Brazil won with Paraguay and Uruguay taking second and third. The Brazil team had players from their 11 aside football team, who had grown up playing the sport. These included stars such as - Pele and Zico.

Futsal progressed to other continents and there was another World Championship held in 1985 under the FIFUSA governing board, which was hosted by Madrid.

In 1989, FIFA took over from FIFUSA due to the growth of popularity in the game over the years. It also changed the name of the sport from ‘Futebol de Sala’ to an a shortened version Futsal. FIFA then held their first World Cup of the sport in the Netherlands the same year.

The rules were changed slightly, so that the game was improved as a whole - technically and professionally, e.g. having larger footballs, unlimited use of substitutes, having a second referee.

Today, Futsal has improved throughout the globe, having specific equipment such as the Mitre Futsal Tempest Ball and the Precision Pro Futsal Tactics Board has helped the sport become technically more advanced. And also gaining more associations within the sport from different countries and vastly increasing their fanbase at major tournaments.

Unfortunately Women’s Futsal has not progressed as well as Men’s. FIFA have been encouraged and there has been campaigns to create an official Women’s World Cup. It has been unknown why 25 years after Men’s first FIFA Futsal World Cup, that the Women’s game has not followed suit. There has also been not a lot of competitions available for the Women to participate in, which is a large reason why Futsal is not an Olympic sport.

We can only hope that Women’s Futsal continues to progress and new teams are created and can compete in competitions and that it can hopefully gain the recognition that Women’s Football is starting to gain.

The first Asian Women’s Football Championships, will be held in Malaysia from September 21st - 26th 2015.

There are 8 teams competing, which are drawn into two groups and they all play each other once within their group. The winner of each group plays the runner up of the other group in the Semi-Final and then the winner of each of them will meet in the final. The other two teams will battle it out for third place spot.

Japan and Iran are favourites in the competition, due to being the top seeds within Asia. They have succeeded in other indoor championships prior to this event, which have gained them 1st and 2nd seed ranking.

Japan are the most successful Women’s Futsal Team in Asia, even though they do not have a proper league system. Saying this they do have region leagues, where players and coaches are dedicated to training and playing matches. Most of the women’s teams are linked with the men’s Futsal teams as they have more recognition within the league system. Chikage Kichibayashi is Japan’s team Captain and their most dangerous player, having fantastic skill.

In Iran they have a proper structured Women’s Futsal league, which has supported them becoming as good as they are. A large number of the Men’s players have become Players of the Year and won a number of tournaments which has encouraged the Women to follow in the footsteps of.