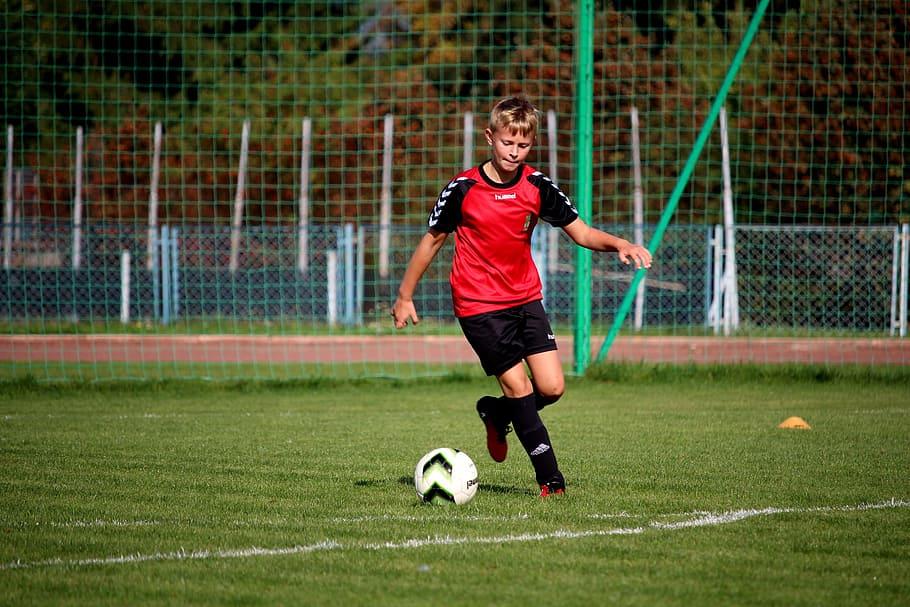 Grassroots football training has to be adapted in order to minimise the risk of Covid infections. Last week, we talked about non-contact football drills that minimise cross-contamination. These drills were aimed at giving each player their own ball, thus reducing the risk of call contamination. But if you’re comfortable with players sharing footballs, there are different Covid-safe drills you can introduce to your training sessions.

Passing and shooting drills involving two or more players are now possible. But while you might be relaxed about ball contamination, you may want to eliminate player-to-player contact. If that’s the case, there are some very effective drills that keep players sharp and ready for match action.

After the three minutes is up, the attacking team becomes the defensive team, and vice versa. Another three-minute session begins using the same rules. At the end of this session, the team with the most points wins the game.

This drill is excellent for practising long passing, movement and defensive positioning. It’s also a lot of fun.

In the heat of competitive action, quick-thinking can make the difference — as well as a lot of space. But if you and your team is having to observe social distancing measures, coaching this aspect of the game can be difficult. Thankfully, there’s a relatively simple drill you can adopt that doesn’t require physical contact.

Start with three players along a single line, approximately 10 metres apart. You can create a line with a series of training cones. The first player in the line is ‘player A’, the second is ‘player B’ and the third is ‘player C’.

The drill begins with A passing to B. Each player must dribble the ball around a slalom pole before passing to the next. Once player B has completed a circle around their pole, they should pass to player C. This pattern should continue until player A has completed a second circle around their pole. Ensure that each player carries the ball both clockwise and anti-clockwise.

This drill helps players to develop their turning skills without coming into close proximity with other players. You can set as many lines of three up as is required; just make sure each line is at least three metres apart from the next.

The optimum number of players for this drill is six. However, you can scale it up if necessary. Before starting, tell your players about what you hope to achieve from the drill. In this case, it’s all about finding teammates in space and judging the length and height of long balls delivered in the heat of the moment.

A few tips for players:

Create an imaginary line in the middle of the ball, and aim for the bottom half.

While there should be an angled approach before striking the ball, the aim is to deliver a straight pass without bend. To do this, your players should be hitting the ball with their laces.

Create a playing area of around 10 metres by 40 metres. You can do this with training cones or markers. Split the players into two groups. The two groups should stand on opposite ends of the playing area. To begin with, get the players used to hitting long balls to specific players in the opposite group. Call out the names of receiving players to ensure each player has a target to aim for.

After warming up with a few long passes, send two players to the middle of the two playing lines. A player on a line passes the ball to one of the players in the middle; that player has to return the ball to the same line with a maximum of two touches. The player on the line then must hit a first-time long ball to a player on the opposite line.

How you develop this drill is entirely up to you. You could, for example, get the players in the middle to move forward in order to exert a little pressure on the pass. However, you should mark a point of no return with a training cone — to ensure social distancing is observed at all times.

If you want to make this drill competitive, each successful long ball can be awarded two points. And a point can be subtracted if a ball fails to find a player or is intercepted.

Sadly, grassroots football has once again come grinding to a halt. But this won’t be forever. When the coronavirus restrictions are eased, grassroots teams will be able to get their seasons going again — albeit with strict safety measures in place. When that time comes, having a series of Covid-safe training drills at your disposal should give your team the best chance of a successful competitive restart.