How Do You Develop Football Speed? Part two. 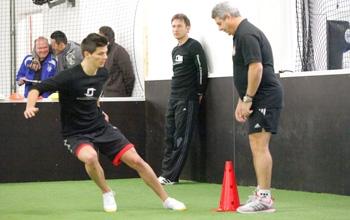 Mike Antoniades has written a series of articles especially for The Soccer Store on “How to Develop Football speed?”

Without doubt, one of the most important factors in modern football and a big concern among today's players and coaches is how to improve Speed, quickness and explosiveness.

What are the four components of football speed:

Quickness is any explosive movement that occurs within 1 metre of the body in any direction. It has also been described as the first gear of speed, or the first three steps of speed. Quickness of feet moving in all directions is paramount.

In football these are the response to signals which are received either optically, acoustically or tactilely. Reaction performance is influenced by a number of factors apart from attention and muscle-pre-tension. Simple reaction times can be increased by 10-15% and choice reaction times by 30% with correct training. Within four weeks. Turning ability is one of the biggest weaknesses that can be trained in all footballers.

Complex speed is linked with individual development of speed strength, speed endurance and the resistance to fatigue, acceleration drills and complex locomotor movements and competition. At elite level we look at training under pressure, when tired, with restricted views and disruptive factors, at all times quality is maintained. The main objective is to carry out complex movements at the greatest possible velocity and be as precise and as technical as possible.

The most common mistake coaches make when coaching youngsters (7-16) is to isolate these skills and teach them in different compartments but young footballers need to constantly make connections between technical execution, tactical and overall knowledge and other important capacities like vision, co-ordination, anticipation, determination and speed.

The Optimal Training period - Who, When, Why & How

Age is a particularly important factor in the development of speed. As we grow up we go through a number of biological development stages, and several “sensitive” stages like the best periods to train.

Although motor development should begin at a very early age and does occur naturally, there are three Key stages where Speed and movement learning should begin:

The period between the ages of 9 -13 years old is ideal for movement and biomechanics training and establishment of motor engrams or movement maps. This is due to the high excitability and plasticity of the Central nervous system which allows us to teach the correct movement patterns.

Many scientists believe that the distribution of Fast Twitch and slow twitch fibres is not complete until the beginning of puberty. So it makes sense to continue to work football speed during the pubescent years when there are naturally increasing levels of testosterone or oestrogen – boys 13-17 years old and girls for 11 to 15 years.

Does this mean that Speed cannot be trained at any other group? No of course not, speed can be improved at any age, particularly football speed, with the right training systems for the sport. But this is the age bracket that we can make the best possible difference.

In an age where speed is one of the most important criteria in the selection process of young footballers, why are we not teaching football speed as part of the skill set?

Coaches of young footballers and parents ( although they have the interest of the children at heart) often make the mistake of copying drills and training methodologies that they have seen at professional clubs, without knowing how to coach the technique of the drill. In many cases these are detrimental to the physical development of the youngsters.

If we look at the criteria that football academies use to select and coach young footballers to enable them to succeed as professionals:

When young footballers reach a certain age about 14 years to 16 years old then these key factors are used to decide if they will become professionals. But if we want to give them the best opportunity these different factors need to be incorporated into the coaching regime from the age of 10 years old.

Mike is the Performance and Rehabilitation Director of Sport Dimensions and the Running School, specialising in Speed, Movement development and Rehabilitation training. He is a qualified A licenced Coach, Strength & Conditioning Coach, Speed Coach and Rehabilitation Specialist. Mike works with a number professional football clubs in the UK, Europe and the USA,  developing Speed and Conditioning programmes - He has worked with players  as well as teams including: Chelsea FC, Chelsea Academy, Crystal Palace, Blackburn, West Ham, Fulham, Blackburn, Stoke City, Ipswich Town, Bath Rugby, winter and summer Olympians.

Mike runs coaching workshops and seminars on Soccer Speed and The Long Term Development of Young Footballers, in the UK, Europe and the USA and he also lectures on Rehabilitation and Injury Prevention. He has developed a number of protocols for Speed Development and Rehabilitation including Dynamic Movement Skills, which are being used successfully in professional football and rugby teams.

He has developed the DVD on How to Coach Football Speed called “Feel the Speed” for more information log on to: www.runningschool.co.uk