How Do I Introduce My Toddler to Football for the First Time? 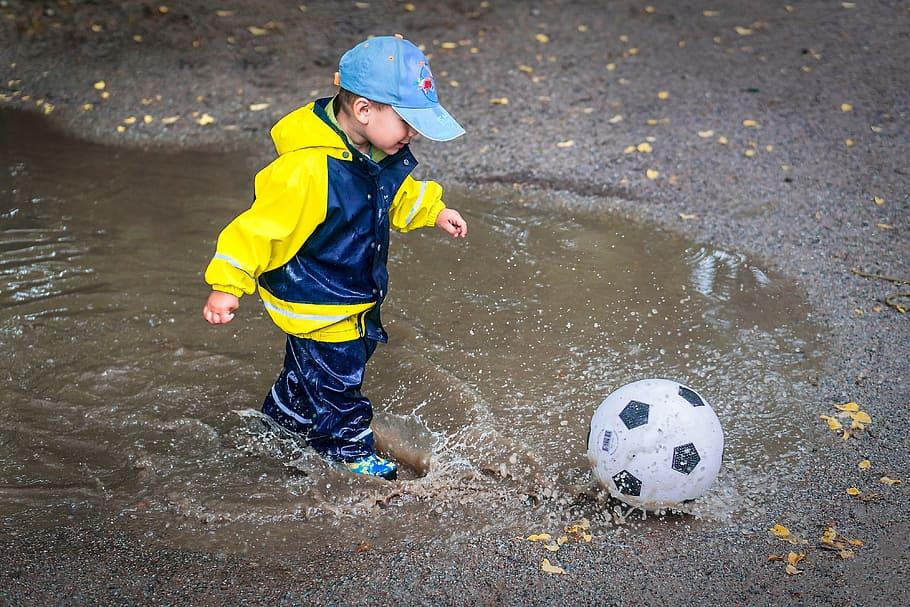 Put a football at the feet of an 18-month-old toddler, and the chances are they’ll kick it. The beautiful game isn’t just a sport — it’s a human compulsion. Once that first ball has been kicked, there’s often no turning back.

But how do you channel that primal instinct into something more skillful? And how do you turn that first kick into a lifetime of devotion? Fortunately, the answers are simple, but they all boil down to one thing — fun.

If football isn’t fun for toddlers, they’ll resist all your attempts to get them to play? And even if they do succumb to persuasion or blackmail, their heart just won’t be in it. They’ll never become proficient at the game, and they’ll probably give up as soon as they have the chance.

The best way to introduce football to toddlers is to keep things fun, light and uncompetitive. Once you’ve nurtured your child’s love of the beautiful game, you can move on to the technical aspects.

If you’re looking for ways to introduce a toddler to football, we’ve got a few ideas you might like to try.

Make it a Family Affair

Children are programmed to copy what others do; it’s part of the child development process. If you lead by example, youngsters will try to emulate how you approach the sport. Remember: kicking a football isn’t football. Most children will do that without any prompting. Get family and friends involved in a friendly game, however, and your toddler will want to get involved.

Create a mini-pitch, either in your garden/yard or at your local park. Use a couple of portable, short-sided mini football goals, and define the boundaries of your makeshift pitch with training cones or markers.

Start kicking the ball around in a fun, friendly way. At this stage, you don’t need teams. However, make it clear that kicking the ball into a goal is a positive outcome. Give lots of praise at every opportunity — even if the ball doesn’t end in the net. When your toddler sees siblings, parents other relatives having fun, they’ll associate the activity with a positive experience. And that’s the start of a long journey.

There’s no point in giving a toddler a size 5 football — it will be far too big. The ball will barely move when your toddler kicks it, which will soon become disheartening. If you buy just one item of football equipment, make it the smaller ball. It will be easier to kick and control, and it will make the whole experience a lot more fun. Start with a size 1 ball, and work your way up to size 3.

Once you’ve kicked a football around with your toddler, it’s a good idea to give them an idea of what a real game looks like. The easiest way to do this is to watch a few minutes of a game on TV. Any longer than five minutes might be a challenge in terms of concentration. Ideally, however, go to your local park and watch a few minutes of a grassroots football match. Once you’re done, you can immediately start kicking your own football around.

The only reward for a goal or a good effort should be a cheer and a clap of the hands. Don’t put pressure on your toddler by keeping score. Ideally, children shouldn’t be introduced to the concept of scores and winners until they’re at least six.

It’s always a good idea to recognise and reward effort, however. This might be a small piece of fruit after a goal, or it could be as simple as a group hug after a goal. Positive reinforcement is the key here, and the more often you demonstrate it, the better it will be for your toddler’s confidence.

The worst thing you can do to a toddler learning to play the beautiful game is intimidate them. Youngsters need time on the ball to develop basic techniques on their own. If tackling, jostling and retaking possession are involved, your toddler won’t get enough time on the ball. And even when they have it, they’ll be concerned about someone taking it away.

At least until the age of four, football should be a non-contact pastime. Let your child develop their dribbling, passing, shooting and technique free from the fear of having the ball taken away.

If the fun stops, stop! Don’t make football feel like a punishment or a chore to your toddler. As soon as they start losing interest, move on to the next activity.

The easiest way to ensure a toddler is having fun is to encourage expression and improvisation. Keep the rules to a minimum, and let your child take control of what’s happening. You might end up playing something that barely resembles football. But as long as your toddler is kicking the ball, it’s a worthwhile endeavour. Make sure you have a few basic items of football equipment at home so you’re always ready for a quick kick-around.