What Equipment is Needed for a Game of Futsal? 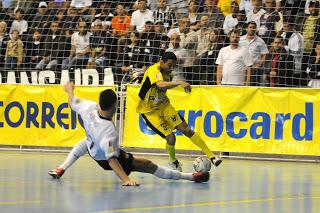 Futsal is one of the fastest growing sports in the world, and it is increasingly being used as a developmental tool for young footballers. Played with a smaller, heavier ball, the game promotes tight control, touch and passing, which is why it is being utilised in professional football academies all over the world.

The essence of this hugely popular game is rooted in football, but there are some key differences – one of which is the equipment needed. Whether you are a coach looking to improve the touch and ball control of your young players or you simply want to get involved in the sport of futsal, there are some very specific items of equipment needed.

The regulation size futsal goal is 3 metres by 2 metres. If you are planning to play the game in different locations, it might be best to choose the lightweight, portable option. Made from high-impact uPVC, these goals are free-standing, and they can be erected and dismantled in a matter of minutes. They come with everything you need to get started, including a carry bag, nets, net clips and ground anchors. Samba futsal goals are among the most popular in the world, as they have a reputation for being reliable, safe and highly durable.

If you’re intending to play futsal at a competitive level, you will probably need to invest in an aluminium futsal goal. The Soccer Store sell indoor or outdoor futsal goals which are manufactured in the UK by MH Goals.

Perhaps the biggest difference between the five-a-side version of football and futsal is the ball used. The essence of futsal involves close control, passing and technique, which is why a smaller, heavier ball is used. The FA recommends that under-12s play with size-3 futsal balls, while the over-13s play with size-4 balls.

Mitre is one of the most respected futsal ball manufacturers in the world. Their size-4 balls are manufactured with a 32-panel finish, which gives them added durability. Reduced rebound and a filled bladder promote passing and control – rather than long and lofted balls.

Most futsal teams play in kits similar to those worn in football and five-a-side. Competitive action requires numbered shirts, shorts, socks, protective shin-guards and trainers with rubber soles. Keepers need to wear a different colour than their teammates in the same way they do in football, and a quality pair of goalkeeping gloves is also needed.

There are some striking similarities between futsal and football, so it should come as no surprise that the sundry items of equipment used in both games are similar. A game of futsal is played over two halves of 20 minutes, and the action can get intense. It is therefore always a good idea to have a set of water bottles at the ready – preferably in a bottle carrier.

It’s also worth noting that sliding tackles are now allowed in the official rules of futsal, so any team will need a fully stocked first aid kit. Hot and cold packs, bandages, freeze spray, sterile eyewash pods and moist wipes are always good to have at hand in the event of an injury.

The game of futsal is fast and furious. Players are forced to retain control and pass, which is ideal for developing the technical skills of youngsters. With the right equipment, you can ensure that your games are as enjoyable and productive as they possibly can be.