Samba Football Goals, the most popular portable goals in the UK 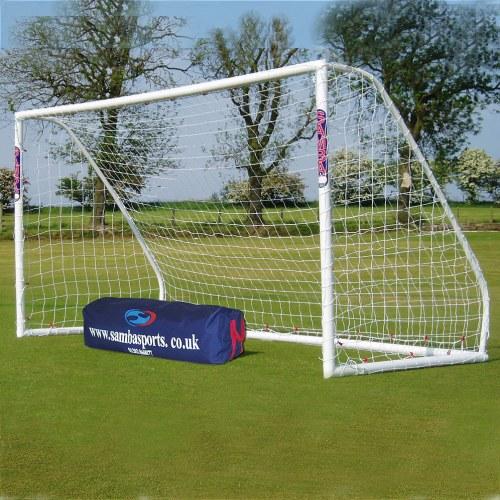 Samba Sports have set the standard for portable football goals we find out what is story behind their success.

When did you start making portable football goals?

Samba Sports began manufacturing goals in 1995 and have now been making goals for over 24 years. During this time, Samba has expanded to become the largest supplier of portable goals both in the UK and Europe.

What was the alternative before Samba Goals came along?

Garden goals were mainly of low quality and would hardly last a season. (I’m sure we have all had one!) Youth football teams had to find a council or school pitch where they could utilise whatever was on offer. Quite often the goals would be too large or dangerous and didn’t comply with any standards. With the boom in youth football and mini soccer an alternative portable goal was needed and Samba had the answer. “We have goals out there that have been in use for over 15 years” (Each individual goal is date stamped)

What makes a Samba Goal different?

Samba football goals have evolved over many years with a philosophy of continuous improvement and are the benchmark for portable football goals. Samba have over 135 years of engineering experience within the business, with key personnel having worked extensively within the Aerospace industry manufacturing components for Rolls Royce and British Aerospace. This experience is used on the continuous development of the Samba product and applied in all areas of the business to give world class manufacturing and customer service.
Over the years many have many have attempted to copy the product but without the engineering background that Samba have they cannot achieve the same quality.

Are Samba Goals just used in the UK?

Samba football goals are certainly the most popular portable goals in the UK, thousands are in use every weekend for mini soccer and nine-a-side grassroots football games as well as in gardens up and down the country. They are not however confined to use in the UK and are shipped all over the world. There are over half a million goals in use worldwide.

So, if you are looking for a portable goal for your children to use in the garden, or to be used in weekend youth football look no further than the Samba Goalposts. Rest assured you will be buying a quality British Product that will see your kids through their childhood years and beyond.