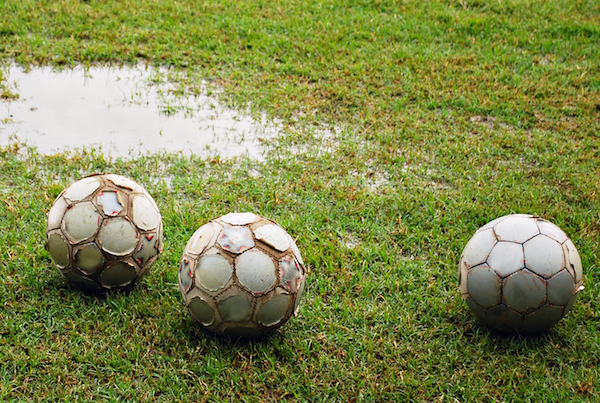 An increasing number of grassroots football teams are having their fixtures and training schedules decimated because of inclement weather. The shocking state of municipal pitches in the UK results in postponed matches and training sessions when it rains. But if your team has access to indoor facilities, there are some very effective training drills that will keep everyone sharp until things dry out.

Unless you’re fortunate enough to have access to an indoor 4G pitch, you’ll need your players to stay on their feet — and here are five training drills that will allow them to do just that.

Create a rectangular playing space for every three players in your team. Put a player on opposite corners of the rectangle, and position the third play in the middle.

A player at a corner starts with the ball, and passes to the player in the middle. The first player must move to a different corner whilst the ball is in motion, and receive it from the middle player in his or her new position. The ball then goes back to the middle player, who passes it to player three.

The basic idea of this drill is to keep the two players on the corners of the rectangle moving after they make each pass. You can stipulate your own rules, including forcing players to use alternate feet. Just make sure you rotate the player who has to stand in the middle of the rectangle.

Create a square playing area of around 10 yards by 10 yards for every group of six players you have. Three of the six players will be defenders, and three will be attackers. The defender must pass the ball to one of the attackers — all of whom should start at the edge of the playing area.

The attackers must then move around the square passing with one touch, making sure they vary the speed and strength of the passes they make. The defender must attempt to win possession. Once this happens, the next defender should try to win possession in the same way. Once all three defenders have completed the task, they should assume the role of attackers and go again.

Split your team into groups of nine, and then create three teams of three within each of the groups. Give each group of three their own coloured bib. The object of the drill is for two of the team to pass to one another without a player from the third intercepting a pass. Each player MUST take an initial touch to control the ball and another to pass it.

Imagine three of the nine players are wearing green bibs, three are wearing red and three are wearing blue. The three green players start with the ball, and must execute a first pass to a player in red. Taking two touches, a red player must make a pass back to a green player — whilst moving around and searching for space. Meanwhile, all three blue players must try to intercept a pass without making bodily contact with a red or green player.

Split your group into two teams. Divide your indoor pitch into two halves, and create a five-metre ‘end zone’ by each goal. Each team should take up their to their own half of the pitch, and 10 or more balls should be placed in the centre of the pitch. On a whistle, the players must sprint to get a ball and dribble it back into their own ‘end zone’ without bumping into another player or allowing their ball to stray more than a 12 inches from their feet. The team with the most balls in their ‘end zone’ wins a point. First team to 10 points wins.

Split your group into two, and line each team up five metres from the centre line, facing each other. Each player should be around two feet from a teammate and have their own ball. Place a cone on the centre line, directly between each set of two opposing players. On the whistle, each player must pass the ball — from a still position — and knock their own cone down. This will mean that two opposing players are attempting to knock down the same cone at the same time. Balls can only be recovered from a player’s own half. The team that knocks down the most cones wins.

Don’t let bad weather affect your team’s match preparations and dampen your players’ spirit. Use these five fun and simple drills to keep everyone engaged and sharp.