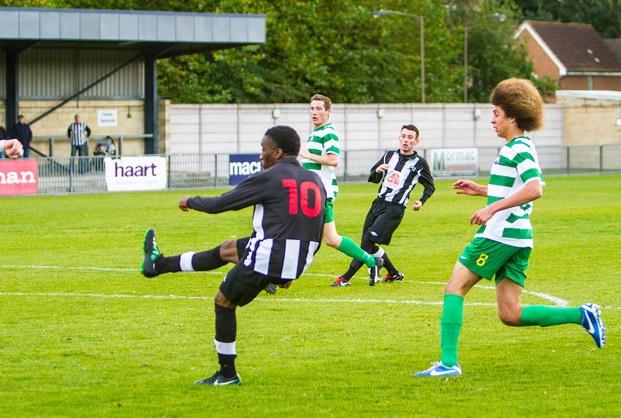 Shooting is an art-form in football, and the only way to improve it is by putting in the hours on the training pitch. The muscles, awareness and skill required to create power in a shot whilst controlling the ball are different to those needed for other facets of the game. There are five drills in particular that will hone these attributes - as long as you’re prepared to put the hours in, of course.

This very simple drill is used by all the top teams – simply because it works. One player stands in the ‘D’, and the person shooting starts the drill by passing to that player from around twelve yards away. The player in the ‘D’ simply lays the ball off, and the shooter runs forward to take the shot. The player making the lay-off should start from the left of the ‘D’ if the shooter is right-footed, and vice versa. It’s always a good idea to spend some time working on the weaker foot too.

This is another simple yet highly effective drill that makes a player combine two very different skills in one move. The shooter should start in the ‘D’ with their back to the goal, and then call for a pass from one of three passers – standing about twelve yards away. The shooter must then bring the ball under control, turn and take a first time shot. The shooter should then immediately call for a pass from the second passer, and so the drill continues. It’s a good idea to experiment with different passer positions, as this will encourage the shooter to use both feet. It may also be beneficial for the shooter to be limited to just two touches.

This slightly more complex drill needs only the shooter. Set up an agility ladder around twelve yards from the penalty area, followed immediately by three cones in a straight line – two yards apart. Place three balls at equal distances apart in the ‘D’, and you’re ready to start. The shooter must hop through the agility ladder, weave in and out of the cones then take their first shot. The drill should be repeated until all three shots have been made. It’s important that this drill is completed at a high tempo. The key points to look out for here are shot accuracy, shot selection and staying in control.

Start this drill with two cones placed at the edge of the ‘D’. The first should be about six yards from the penalty area, and the second should be right on the edge of the 18-yard box. A passer should be placed at each of the cones, and the shooter should start with the ball equidistant from the ‘D’ and the halfway line. The shooter begins by running with the ball and passing to the player at the first cone. The ball is played back to the shooter with one touch, who must play it to the passer at the second cone immediately. The second passer once again passes back to the advancing shooter with one touch, and the shot must be taken immediately.

Pass, run on and shoot

Place two passers at either side if the ‘D’ – one about a yard from the edge of the penalty area, and another about three yards from it. You can mark these positions with training cones. The shooter should start about twelve yards from the box, and pass to the player at the closest cone before immediately starting a run towards the box. Meanwhile, the player at the first cone passes to the player at the second – right in the path of the advancing shooter. The second passer then lays the ball off for the shooter to take the shot. This drill will help to develop shot accuracy, awareness of other players and shot selection.

Choose the shooting drills that work for you or your team, and make them part of your weekly training rituals in order to perfect your team’s skills for match days.