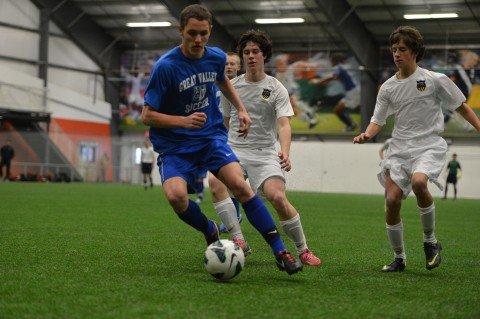 The growing chasm in quality between the Premier League’s top six and the rest of the league is causing a real problem for managers. How do you get a team of honest yet limited players to stop some of the most talented stars in the World cutting through your defence like butter? The only way the league’s second and third tier teams can get anything out of these games these days is by staying compact, soaking up pressure and hitting the opposition on the break.

But there are many ways to execute counter attacks in the middle of a match. Mastering this art takes time and lots of practice, which is why hard work on the training field is essential. Preparing a team for this style of play is relatively easy when you have a specific gameplan in mind… and these six specific counter-attacking strategies.

Once your team is adept at soaking up pressure, you can use your lack of possession to your advantage. The more possession you concede, the more space quick forwards will find behind the opposition’s defensive lines.

Just after failed attacks that end with the goalkeeper gaining possession, a quick throw from the edge of the area can take the opposition by surprise — when they’ve lost their defensive shape. With just a single throw, you’ll be able to take several defenders out of the game. For this strategy to work, you’ll need pacey wingers and strikers.

By dropping deep, keeping a disciplined line and remaining compact, your team will draw the opposition into your own half. While many coaches believe that this is a high-risk approach to defending, it does give you options to counter-attack, but only if your team is adept at transition play.

The moment the opposition loses the ball in your defensive third, instruct your players to seek out a quick lobbed pass over the top of the defenders. While this isn’t the prettiest way to play football, it can be one of the most effective if your team lacks technical ability. But to make it work, you’ll need lots of pace in the offensive third of the pitch.

How often do you see professional players running AT defenders these days? The likes of John Barnes and Chris Waddle made a career out of this approach to the game in the 1980s, but the swashbuckling winger is almost a relic of footballing past.

But defenders get jittery when they’re out of their comfort zone… they make mistakes. Having conceded so much space, most defenders will nervously jockey their attacking foe — which is a great opportunity for pacey players who like to run with the ball. Getting wide players to do this running should open up large gaps in the opposition defence.

While some defensive teams will drop deep and look to exploit space with quick forwards, others will take a pressing approach in the midfield area. This strategy requires exceptional levels of fitness, as huge distances need to be covered by players over the course of a match. In addition, everyone in the team is expected to press the ball, including the wingers and strikers. But by never giving the opposition any time on the ball, your players will often be able to steal possession and turn defence into attack in a second.

By pushing your defensive line as near to the halfway line as possible, you can push the opposition players nearer their own goal. However, this is a very risky way to play for a team with inferior players, as a perfectly timed run and the perfect ball can break the offside trap and lead to a clear goalscoring opportunity. But if you can get it right, you can break while you’re closer to the opposition goal — after winning possession through constant pressing.

Keep a straight, well-organised back line as deep as possible, and another midfield line just a few yards ahead of it. By conceding space, you’re inviting opposition players to come forward and attack, and you can exploit the gaps they leave with long balls and pacey forwards. However, playing this way means you’re going to be under serious pressure for long periods, so your defenders need to be strong, capable and exceptionally fit.

When your team is competing against superior opposition, adopting a counter-attacking strategy is usually your best chance of securing a victory.