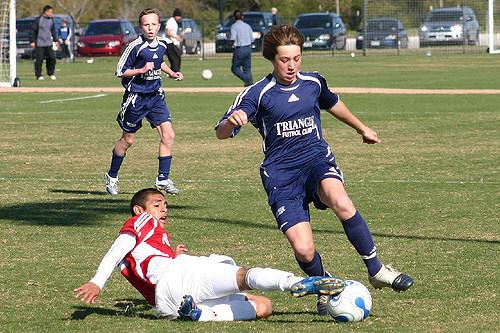 Wayne Rooney is about to become the latest European football star to see out their career in America. It seems the lure of MLS is too much to resist for the world’s biggest stars. But why is this? More importantly, is it hurting the development of the game Stateside?

When Kaka signed for Orlando City, he picked up a cool $7.1 million a year. While this was nowhere near the wages earned by the stars of American football and basketball, it was huge in MLS. To put it into context, the maximum wage at the time was less than $500,000. The MLS’ Designated Player rule meant Orlando could blow their annual wage budget with the help of sponsors.

Compare this to Orlando’s top scorer at the time. Cyle Larin was on an annual salary of around $450,000. Incidentally, Larin scored twice the number of goals Kaka did during the Brazilian’s first year in MLS.

With so much money going to the aging stars of the European leagues, there are concerns that the grassroots game is missing out on crucial funding. Moreover, MLS teams just aren’t being incentivized to bring young players through — thanks to crazy restrictions on how and when big transfer fees can be spent.

Each MLS club has its own academy. Unlike professional clubs around the world, MLS clubs are expected to spend a specific percentage of their income on bringing their youngsters through. This, on the face of it, seems like a great idea. But what it means in reality is something very different.

If an MLS side were to receive a huge offer for a player from one Europe’s top clubs, 25 percent would go straight to the league. The remaining 75 percent would be subject to some serious spending restrictions, not least of which the rather meagre wage cap.

The road to MLS success is complex and often arbitrary

The way franchises acquire their players is so convoluted, many European coaches have simply failed to grasp it. There are on-budget and off-budget senior rosters, reserve rosters and supplemental rosters. Within those categories, there are domestic and international players — and the rules for each depend on whether the franchise is based in Canada or the USA.

But the confusion doesn’t end there. There’s the SuperDraft, Allocation Ranking Order, trades, the College Protected List and the Homegrown Player Rule. There is no upper limit to the number of Homegrown Players a franchise can sign, and they can occupy Senior, Supplemental or Reserve Roster places.

The Homegrown Player in the MLS is the nearest they have to a youth player in the academy systems used in all of the world’s major leagues. If the player has attended the franchise’s academy for at least a year, he can sign for the club on professional terms without being subjected to the MLS SuperDraft. However, each franchise has its own catchment area for such players, which means if the local club doesn’t fancy a youngster, that player can’t enter the MLS system via the Homegrown rule.

Lost? You’re not the only one. Soccer is America’s most popular participation sport for under-12s, yet the road to the top is so confused and complex. So much so, many talented players are getting lost in the system. Add to the mix overpaid, aging superstars looking for one final payday, and it’s easy to see why the USA national team has been going backwards in recent years.

It’s important to make the point that the academies themselves are well funded and, in the main, well run. The U.S. Soccer Development Academy is a league that include MLS academies and those from the North American Soccer League and the United Soccer Leagues. The competition is tough and the quality it relatively high. Initiated to emulate the success of College Football (American), the DA includes 149 clubs, and 74 girls’ clubs.

The DA takes an holistic approach to player development. As well as world class coaching, players are taught life skills and given emotional support. There’s also a highly competitive competition at the heart of the system — which prepares youth players for the rigours of the MLS.

Of course, some MLS academies are more successful than others. The Vancouver Whitecaps, for example, have produced the likes of Russell Teibert, Alphonso Davies and Marco Bustos. They operate a number of development centers across America, as well as an elite residency program for the best talent.

The New York Red Bulls’ academy has produced stars like Juan Agudelo, Sean Davis and Matt Miazga. The first team recently boasted six homegrown players — an MLS record. LA Galaxy was one of the first MLS franchises to take player development seriously. Using their USL affiliate club, the Galaxy were able to give young players competitive experience at an early age. Other respected academies include those at FC Dallas and Real Salt Lake.

Despite the great facilities at these academies, the number of homegrown players to make it to the very top of the game is still exceptionally small. The likes of Miazga and DeAndre Yedlin ending up at Chelsea and Newcastle United respectively is still the exception rather than the rule.

MLS teams just aren’t being incentivized to give their own talent opportunities. Perhaps if those teams were allowed to spend transfer fees as they see fit, they’d be more likely to give their brightest talent more time on the pitch.

Of course, the Premier League has its own problems in this regard. There’s just too much money at stake to give young players at the top clubs their big chance. As a result, the vast majority of academy products end up at lower league clubs.

It seems that both leagues have something to learn from one another.