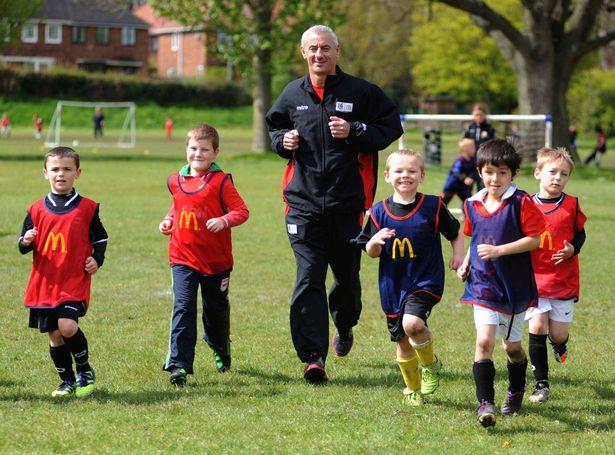 The fact that grassroots football across the UK is chronically underfunded is now common knowledge. This isn’t just a problem for the sport of football; it is a problem for society in general. And despite several initiatives and funded projects to improve the situation, the FA, the Premier League and the various organisations involved have barely scratched the surface.

So when someone — whether they’re a rich altruist or a former professional — announces they’re going to make a difference, it’s great news for everyone. Not only do such initiatives help people in some of the most deprived communities of Britain, they also inspire other people to similarly impressive things.

Former Liverpool striker and Wales legend Ian Rush is the latest professional to put his money where his mouth is, after launching his very own football foundation.

After learning that he’s to receive the very first Legends of Sport Award, the striker showed his class by bring forward the launch of his new foundation — to ensure the spotlight is firmly on his project.

Rush was inspired to give something back after working as a Liverpool Ambassador. He has travelled all over Britain, Europe and the rest of the world on goodwill missions for the club he loves — which is why his new foundation will be a global one.

Rush told Sky Sports: “I've been over to India lots of times and I was really touched when I went to visit the children in the slums. The most amazing thing was that the kids were all smiling.

"Give them a ball, they'll kick it around and they're happy. Money can't buy that kind of happiness. But if we can help them a little bit through the foundation, whether that's something to wear or some equipment or a facility that they can play at, it will make them better.

"I want the boys and girls to enjoy themselves in what they do and I want to put back into grassroots football. The job of the Ian Rush Foundation is to give them the apparatus, the facilities and everything so that they can enjoy it. The more they enjoy it, the more likely they are to get to a higher level."

Rush has teamed up with Avalon Sports to promote football projects in communities around the world. The idea is simple: to provide the infrastructure needed to get the poorest people in society playing football regularly.

The simple truth is that Ian Rush has already made a difference. To help just one underprivileged child play the beautiful game is an admirable achievement… to help hundreds is incredible.

And it’s not just Ian Rush making a difference. In this age of hyper-inflated wages and even bigger egos, it’s great to see so many legends of football using their cash, their fame and their network of contacts to open doors for youngsters.

Other Superstars Improving the Lives of the Less Fortunate

Didier Drogba is one such former player. The Didier Drogba Foundation transcends football, and helps communities in his native Ivory Coast with necessities such as food and water. He played a large part in ending the country’s civil war in 2006, which earned him a spot on TIME magazine’s list of the world’s 100 most influential people that year.

Former Newcastle and Liverpool striker Craig Bellamy poured £1.4 million of his own money into the Craig Bellamy Foundation, which aimed to provide the poorest children in the world with an education — as well as an opportunity to play football.

There must be something in the water in Liverpool, as former Kop striker Dirk Kuyt also has his own foundation, which is dedicated to helping children to escape poverty in developing countries.

And the world’s two greatest players — some would say in the history of the game — have also shown enormous generosity to good causes. Lionel Messi has his own foundation that helps underprivileged children in Argentina. As well as promoting UNICEF, Messi has also personally funded a number of projects in his home country, including the building of a youth football clubhouse and the restoration of an entire hospital.

Real Madrid legend Cristiano Ronaldo was able to raise 1.5 million euros to build schools in Gaza — by selling his 2012 Golden Boot. He’s a brand ambassador for “Save The Children”, as well as a major donor to a cancer hospital in Madeira.

Ian Rush isn’t just helping young people to play football — although that’s a big part of what his foundation is doing. He’s also improving the lives of some of the world’s poorest kids. Football really is a force for change, which is why it needs the support of both governments and big business.