Could Increasingly Severe Weather in the UK Spell Disaster for Grassroots Football? 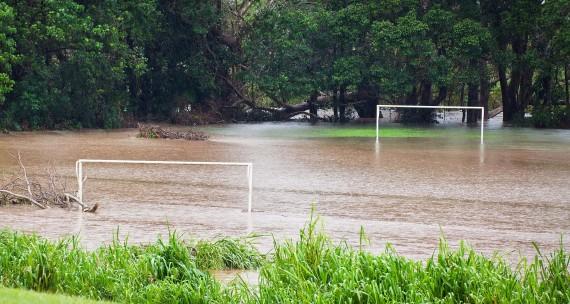 Football clubs, leagues and associations throughout the UK have been struggling to cope with major problems coming from almost every conceivable direction in recent years.

As well as chronic underinvestment, declining participation levels and decaying facilities, a growing number of clubs are now struggling to simply fulfil their fixture list.

Several postponements in recent months have been highlighted in newspapers and community websites - demonstrating the extent to which the very existence of local clubs and associations is threatened by increasingly severe weather patterns.

The Lancashire Telegraph recently published an article highlighting the problems facing the Blackburn Sunday League. Since November 8 2015, the league has managed to get just 15 games played. As a result, the league is facing a massive backlog, and things could get even worse by the end of March.

This is not a short-term problem. Yes, a lack of match time will impact on player performance, increase injury rates and make some matches less competitive this season, but the long-term impact could be far more serious. If local clubs, associations and councils can’t maintain safe playing surfaces, there is a very real risk that the rate at which young people are leaving the game could drastically increase.

According to another article on the Hartlepool Mail website, postponements have led to some players waiting up to two months to play a competitive match. With so few alternatives being offered by local authorities, Sport England, central government and the FA, is it any wonder that children and young adults are leaving the game in their droves?

What is perhaps more alarming is the fact that some leagues and associations are actually making life harder for struggling clubs. There are grassroots leagues in the UK that prohibit league matches from being played on artificial surfaces. A combination of increasingly severe weather and falling financial support from local councils is giving local clubs very few options.

So, before the FA continues its programme of 4G pitch building in England, it should exert pressure on local associations and leagues to allow the use of artificial playing surfaces - even if it means restricting their use to emergency situations.

Just this last week, incessant rain in Hampshire caused dozens of local matches to be cancelled throughout the county. If predictions about future weather patterns in the UK hold true, mass postponements like this will become part and parcel of the game. The FA, County FAs and league administrators can’t continue to sit on their hands and wait for the problem to go away.

This problem will get a great deal worse before it gets better.

The inaction of the FA and a lack of cooperation and consultation with local leagues is leaving tens of thousands of players high and dry. These are players who have to pay subs for the privilege of playing the game they love. There will come a time when many of these players will simply decide to spend their money in a way that actually benefits them on a daily basis - and not just when the weather is pleasant.

This is not a recent problem. For years, weather patterns have been wreaking havoc with match weekends at the grassroots level. In 2014, the Guardian reported that more than half of grassroots football leagues had experienced widespread disruption due to a combination of poor facilities and bad weather. More than half of the leagues in England had to postpone more than 55 matches in a six month period. And when surveyed, more than six out of 10 of the leagues said that postponements could have been prevented with better facilities and drainage.

There is a very real risk that the next generation of British footballers could be lost - which will undoubtedly have an economic effect on both the FA and the Premier League. All levels of football are related, and if those at the bottom of the playing pyramid can’t get the regular game time they need, club owners and the various governing bodies in the professional game will eventually pay a high price.
The FA, the Premier League, local councils and the UK government have to deal with the fact that our weather will probably worsen over the next five decades. More and more matches at the grassroots level will either be postponed or cancelled for good. And the longer this goes on, the more the game will wither and die as a participation sport.