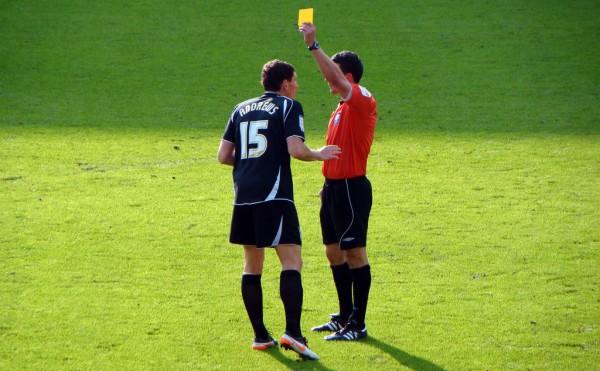 The level of abuse being aimed at football officials up and down the country has been growing for some time. While the FA’s Respect campaign has succeeded in tackling the issue up to a point, there still remains a major problem.

Our referees at the grassroots level are pretty much on their own every Saturday and Sunday morning. Without the protection of police, stewards and other FA representatives, they are susceptible to both verbal and physical abuse.

Exactly why this is a growing problem in the UK is a matter of debate right now. However, the sight of multi-millionaire footballers screaming abuse at referees on TV every week surely can’t be helping the problem.

A new age of changing laws

At the beginning of the 2016/2017 season, we were told that the FA was getting tough on dissent and abuse in the Premier League. Those charging at referees or hurling abuse would be punished with yellow and red cards, suspensions and possible retrospective action. This new approach lasted a few weeks, and it was quickly forgotten about.

Having watched a huge amount of televised football this season, the issue of dissent at the elite level is as bad now as it ever was. Like it or not, the biggest stars in the Premier League and Football League are setting an example for our youngsters — and it’s an example of petulance, anger and disrespect.

What good can come out of any national Respect campaign if the most visible and recognisable people in the game are behaving like thugs? Until we start to clamp down on bad behaviour directed to match officials, the problems being experienced in our parks and playing fields every weekend will continue to mount.

But all hope is not lost. The FA finally seems to be taking this issue seriously. The game’s governing body in England has confirmed that it will trial sin bins at the beginning of the 2017/2018 season.

Sin bins in football are now a part of the game

Following an International Football Association Board meeting in April, it was agreed that a small change to the Laws of the Game could go ahead to allow grassroots leagues more freedom to police themselves. As a result, sin bins have been given the go-ahead for leagues that are at least six tiers below the National League.

Sin bin trials have been underway in Europe for three years now, and the prospect of them being used in the professional game is not as wacky as once thought. And while we shouldn’t expect to see this American idea being implemented on Premier League pitches anytime soon, it could be a crucial first step to one of the most daring law change since the implementation of the passback rule.

As part of the plans, a player will be sent to the sin bin if they receive a yellow card for dissent. The player will not be able to take part in the game for a period of ten minutes, and no substitution can take place. At the grassroots level, the prospect of letting their teammates down so badly might make players think twice before hurling abuse at a referee.

The FA is taking a proactive role on this issue, although it will be up to individual leagues whether or not they opt into the law. More than 1,000 clubs have been asked if they’d like to take part in the trials, which demonstrates how seriously the FA is taking the issue.

Slowly but surely, the FA, UEFA and FIFA are demonstrating that they’re open to law changes that can make the beautiful game even more wonderful. Following the long-awaited implementation of goal-line technology, the FA is about to launch retrospective disciplinary action for divers. This is a promising and long overdue commitment to making the game a better spectacle for everyone.

The professional game could be next

Should the initial trial prove successful next year, expect to see league higher up the football pyramid adopt sin bins. There is a reasonable chance that we could see this ambitious law change in the Premier League and Football League within five years — and that would really send a clear message to those who believe abusing grassroots match officials is acceptable.

As a further inducement to cash-strapped grassroots clubs, the FA will waive the usual £10 administration charge that applies to players who receive a yellow card. It’s hard to make an argument against this new initiative.

Of course, there is also the entertainment issue to address too. The idea of players being removed from the field of play is an exciting one. Giving the opposition team what Americans might call a “power play” will add a new dimension to football in England. Let’s face it: a countdown to a player’s return to the action could make great TV one day.

If this new law is implemented at every level, it could improve the behaviour of professional and amateur players around the country. And that’s a situation that could lead to more officials and players getting involved in the game.

Football crowd respect barriers can be purchased from our website here https://www.thesoccerstore.co.uk/matchday-equipment/department/pitchside-football-barriers