What is the FA's 'Just Play' Scheme? 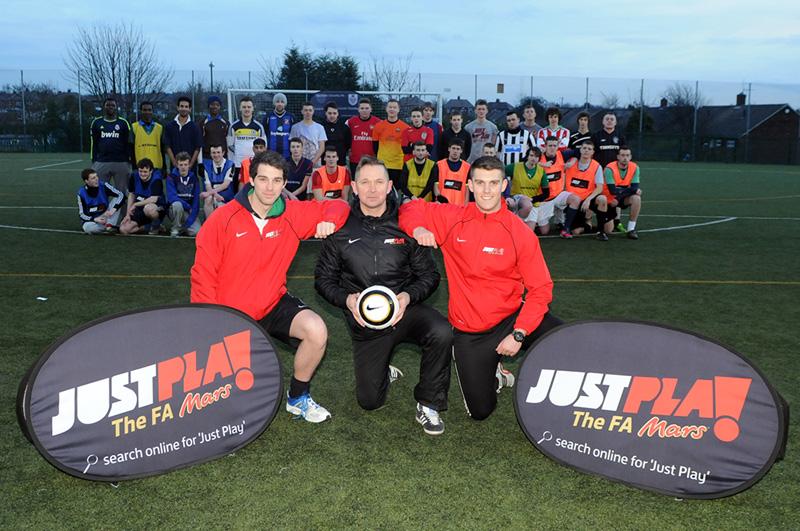 At a time when obesity levels in the UK are rising, and when the effects of sedentary lifestyles are costing the NHS millions of pounds every year, the FA is driving forward with its plan to get adults playing football in their local communities.

Imagine you’ve just finished work, and you’re doing what you do every night of the week: heading back home for dinner and a night of relaxation in front of the TV. However, the FA’s ‘Just Play’ scheme could give you something more sociable and healthy to do with your spare time in the evenings. Simply roll up to one of the approved centres around England with your kit, and you could be enjoying a friendly game of football with like-minded people from your local community.

What’s it all about?

The ‘Just Play’ scheme is a national initiative that has the ultimate goal of getting 150,000 adults playing football for at least 30 minutes every week. Backed by key figures in the game such as Peter Crouch and Roy Hodgson, ‘Just Play’ is aimed at people who want the opportunity to play on a casual basis in their local neighbourhoods. Open to adults of all fitness levels and abilities, the scheme utilises 100 ‘Just Play’ centres throughout England, as well as a team of co-ordinators who oversee individual football sessions.

The FA’s approach to community football has the backing of both the British government and many leading figures in the medical profession. And given the statistics on obesity, it’s easy to understand why. The NHS has warned that half of all adults in the UK will be obese by 2050, which could put national resources under unbearable strain. Obesity could become a problem similar in scale to smoking, which is why the need to get active on a regular basis is of paramount importance. It is estimated that the cost of obesity-related diseases in the UK could be as high as £50billion by the year 2050, so the government is looking for inventive ways to get people moving – and the FA’s ‘Just Play’ initiative certainly fits the bill.

Creating a new generation of footballers in England

The FA’s motivation for making the scheme a success involves the future commerciality of the domestic game and the success of the national team. A recent report commissioned by Sport England revealed that the number of adults playing football decreased by more than 8,000 during 2013 – at a time when overall participation in sport rose by 180,000. As a result, Sport England cut the FA’s funding by £1.6million, but it seems that football’s governing body is determined to increase participation at the grassroots level, with or without the help of Sport England.

It is in the FA’s commercial interests to get more adults playing the game. People who play football on a regular basis are more likely to buy merchandise, equipment, match tickets and TV subscriptions. More importantly, regular participation among adults could inspire future generations to take the game seriously – spawning a new breed of technically gifted footballer for the England national team.

Football in the heart of local communities

Local football clubs, leisure centres, schools, colleges, healthcare centres and a range of other community based service providers are being encouraged to apply to become one of the FA’s ‘Just Play Centres’. Successful applicants are rewarded with a branded playing pack to get them started, and they can start to host playing sessions straight away. Referred to as ‘Just Play Kickabouts’, these casual football sessions are tailored to both men and women, and there are sessions for beginners, disabled people and the elderly too.

The issue many adults face when trying to get involved in football is the fact that most opportunities to play require a long-term commitment. Not everyone has the time to spend training twice a week and playing on a Saturday morning. That is why ‘Just Play Kickabouts’ are casual sessions. There is absolutely no commitment to return at the same time every week, and players can take part as regularly as their lifestyle allows. The sessions not only give people the chance to socialise whilst getting fit, they help people to develop their own footballing skills. Each session is taken by an FA qualified coach, who will provide tips and advice along the way.

Football is a great way to get fit, live longer and meet new people. We have all become busier and generally more stressed during the last two decades, and many people have given up playing as a result. The Mars ‘Just Play’ initiative aims to change all that – and it has been a resounding success so far.