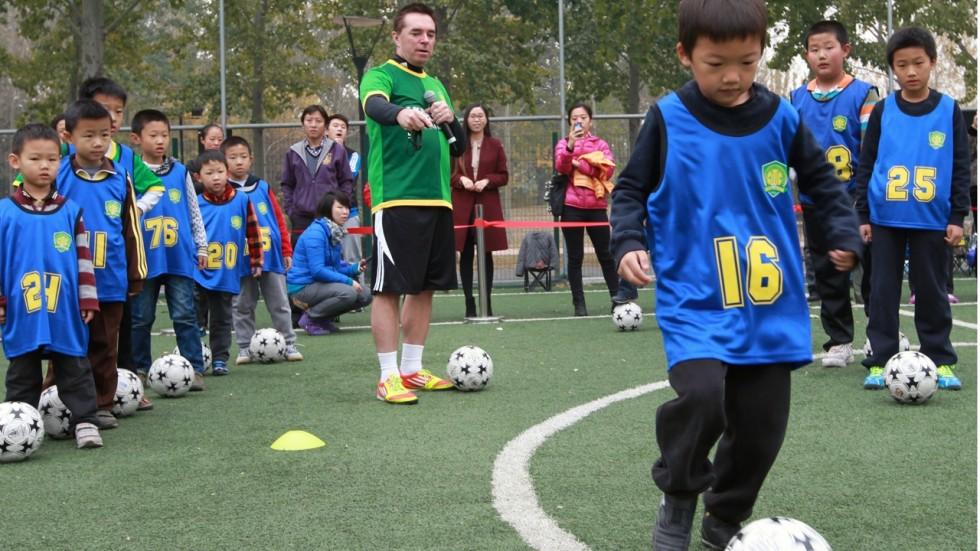 Football in China is still in its infancy, but it has already made waves around the World. Chinese multi-billionaires are funding a huge expansion in the game, bringing stars like Carlos Tevez and Oscar to the Chinese Super League. But while the high-profile transfers make the headlines, it is the work going on at the grassroots level that is most impressive. And British businesses and coaches are playing their part in this revolution.

China’s government is investing heavily in the development of domestic players, with the main aim of winning a World Cup within the next 50 years. Millions are being poured into new pitches, training facilities and academies, so it’s probably only a matter of time before China is a major footballing power.

This community-based revolution may be dependent on Chinese cash, but British firms and footballing organisations are providing the expertise. Take Karl Hawkins, for example. The chief executive of Kehua Sports accompanied the Chinese leader on his recent fact-finding mission to Manchester City’s huge training complex — and he’s already opened four new training facilities in China.

Using the training formula adopted by Premier League teams, Hawkins is helping China to raise its game when it comes to standards amongst domestic players. And his next project is a private football academy, which is being modelled on Manchester City’s. This huge complex won’t just develop the next generation of players, however, it will create the next generation of coaches.

The scale of China’s ambitions is just beyond comprehension. The government wants to have 70,000 quality pitches and 20,000 training centres by 2020. It also hopes to make 50,000 schools “powerful in football” by 2025. This hugely ambitious project requires an enormous amount of cash, as well as some serious expertise. Unfortunately, for the Chinese, they are seriously lacking in the latter, which is where British firms come in.

During the construction of his four huge training facilities, Hawkins used British firms for line marking equipment, goalposts, football training equipment, pitches and construction. And it was British architecture firm AFL Architects who designed the complexes — having created similar projects for the likes of Manchester United and Chelsea.

It’s not just big business in Britain that is benefitting from China’s relatively new love affair with the beautiful game, however. China needs coaches, and it’s turning to clubs such as Celtic for help. Celtic F.C. is working in conjunction with Chinese firms to deliver new coaching projects at the grassroots level.

The Chinese authorities have already sent dozens of their young, aspiring coaches to Glasgow for intensive training. And many youngsters have been fortunate enough to travel to Scotland for specialised coaching with Celtic’s coaching staff. The ultimate aim for Celtic is to grow their Chinese fanbase, so it’s probably only a matter of time before the Glasgow club strikes a partnership deal with a Chinese Super League club.

The potential for the growth of British football in China is still enormous. Yes, the Premier League already has a strong following in the country, but it’s nowhere near what it could be. Just this past summer, officials from Newcastle United went on a fact-finding mission to China, and came back with a major sponsorship deal. The link between Chinese and British football is growing quickly, and that’s probably great news for both countries.

Just last year, the British government invested £3 million in Chinese grassroots football. At the time, the move was labelled as reckless and extravagant, but perhaps there was method in the madness. OK, so the idea of austerity-ravaged Britain giving the second richest country in the World a cash handout seems ludicrous, but perhaps this gesture of goodwill can put British clubs, firms and coaches in a strong position when it comes to spending the billions China has for the development of its domestic game.

China finds itself in rather a strange position at the moment. No country in the World has more money to spend on its national game than China, yet attracting players in sufficient numbers is proving a tall order. Due to the abject failure of the national team, the affections of Chinese football fans are being directed towards Premier League stars. This has prompted CSL clubs to spend millions on foreign talent, rather than investing in domestic talent. The government has moved to stop this from happening by slapping a huge tax on overseas transfers — something that will benefit British firms.

Make no mistake, football in China is going to be massive. And because British companies and coaches have been involved from the start of the revolution, they should be amongst the biggest beneficiaries in the future.