How Safe Are Artificial Pitches That Use Crumb Rubber? 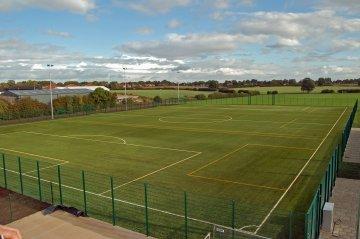 18-year-old Lewis Maguire was a highly promising goalkeeper with dreams of playing in The Premier League. That was until he developed Hodgkin’s Lymphoma whilst on trial with Leeds United.

Lewis’ father Nigel is a former NHS boss, and he believes that his son might have developed this aggressive form of cancer as a result of playing on synthetic surfaces on a regular basis.

Nigel Maguire has warned that the rubber crumb added to 3G and 4G pitches to give them their bounce is made from old car tyres - containing a range of hazardous chemicals, including benzene, mercury, arsenic and lead.

This highly publicised case brought the use of artificial pitches firmly into the national spotlight, and forced manufacturers and the FA to speak out.

Lewis was a goalkeeper who was constantly on the ground making saves and doing what all good keepers do. His father believes that Lewis was swallowing rubber crumb on a regular basis. And while he has stopped short of attributing his son’s cancer to the use of the substance, he believes more research is required.

Footballing and medical authorities are now being urged to carry out research on the effects of swallowing this crumb - rather than simply coming into contact with it.

Following appearances by Lewis’ dad on national TV shows, several bodies have been forced to come out and make an official statement on the issue. Cheshire FA, for example, has reiterated its belief that the benefits of artificial playing surfaces far outweigh and drawbacks.

The Cheshire FA referred to its own research - which concluded that claims of potential health risks in relation to the use of rubber crumb were without foundation and lacked any scientific evidence to support them.

The Cheshire FA went on to state that the crumb used in 3G pitches is tested to the same standards as children’s toys. No issues of toxicity were reported in any of these tests. Whilst this is true, these tests don’t monitor the effects of long-term ingestion of toys - something Lewis’ father is calling for.

The Football Association has also stated its support for the use of 3G pitches in the UK. They say that numerous studies have concluded that the use of crumb rubber is safe - both for human health and the environment.

The FA says it will continue to monitor industry research, and provide advice to its members, clubs and associations when appropriate.

But the question remains: Will there be studies into the effects of long-term ingestion of crumb rubber?

While there is no proof that these artificial pitches pose a risk to human health, this doesn’t mean a link doesn’t exist. Lewis’ father is calling for a temporary ban on the installation of crumb rubber pitches in the UK until a detailed study into the effects of swallowing the rubber is carried out.

Despite Nigel Maguire’s pleas for more research in the UK largely falling against deaf ears, the potential link is being taken more seriously in America. Campaigners in the US are calling for more research after linking at least 150 cases of cancer to the use of rubber crumb. And the City Council in Edmonds, Washington State has already banned the installation of artificial pitches using rubber crumb on any publicly-owned playing surface.

The fact that there is currently no evidence to prove a link exists between crumb rubber and ill health is not a reason to dismiss growing concerns amongst young players and their parents. The lack of evidence doesn’t necessarily tell us that this substance is completely safe. It may simply mean that the right kind of research hasn’t taken place thus far.

Lewis Maguire was a goalkeeper, so he spent a great deal more time on the ground than most of his teammates. It is probably perfectly reasonable to at least question the health implications of swallowing industrial rubber over a long period of time. After all, this stuff contains some pretty nasty stuff - and Lewis was swallowing it on a regular basis.

The installation of 4G pitches in the UK is a rare growth industry - and something the FA has wholeheartedly backed. Whilst it is important not to yield to knee-jerk reactions to these safety claims, it is equally as important to carry out detailed research into the effects of swallowing crumb rubber over an extended period. Don’t our youngsters deserve that?