Inside One of the FA's New Footballing 'City Hubs' 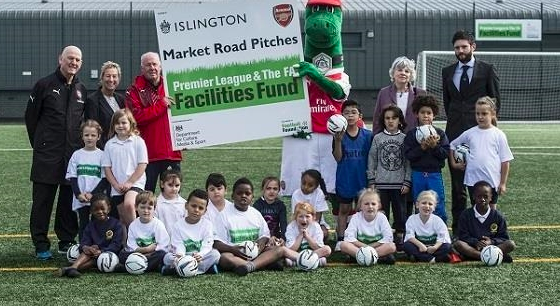 As part of the FA’s drive to improve footballing standards amongst English youngsters - and increase grassroots participation levels - a series of ‘City Hubs’ were put into development, and the first of them are now opening.

Around 30 hubs are planned for towns and cities across the country, which are all aimed at people who want to play football regularly in their own community. The state of the nation’s football facilities has led to declining technical skills and participation levels in the past, and this initiative is the FA’s attempt to reverse this alarming trend.

One of the first to open was a £2.1 million hub in London’s Islington, and the early reviews suggest that it is going to be a big hit in the area.

In September 2015, former Arsenal player Liam Brady opened Islington’s new football hub, which was funded by grants from the FA Facilities Fund, Islington Council and the Premier League. This occasion marked a momentous moment in the history of English football, as it proved that elite clubs, the game’s governing bodies and local government are capable of working together for the good of the game.

An old football facility on Market Road was chosen as the site for the hub, ensuring that this project leaves both social and economic legacies, as well as a vital footballing legacy. And after just a few months, Islington has been given a gift that could change lives.

The borough’s new hub is home to two full-size, resurfaced 3G pitches - ensuring that the weather never again interrupts the development and enjoyment of local footballers. For training purposes, and for casual players in the local area, there are three new small-sided pitches, all of which have the very latest 3G artificial playing surfaces.

Islington’s hub has also been fitted out with top notch changing facilities - which can cater for up to six teams at a time. Players can enjoy exceptional shower facilities too, which should persuade many disenchanted players in the area to return to the game they left because of poor facilities.

Coaches and administrators have also been catered for at the Islington hub. There are two separate rooms for officials, office space, storage areas for equipment and a meeting room. Coaches and administrators now have space to develop their tactics, meet with colleagues and run their clubs - something many in the game have never experienced before.

But this new hub isn’t just for players; it is for spectators too. People who want to watch football in their local community can do so in greatly improved spectator areas, which include raised walkways that run between each of the hub’s five main pitches.

Since the hub’s opening, it has gained a fantastic for hosting community football, and it has already become home to two of the area’s grassroots leagues: the Islington Midweek League and the Camden & Islington Youth League.

A successful collaboration between football and politics

It is hoped that regular football played in an environment conducive to development and player enjoyment will entice more young people to the game. While the 11v11 format is expected to grow in popularity throughout the borough, the small-sided pitches will act as a stepping stone for players and teams with ambitions of forming new 11-a-side clubs.

This footballing hub has been a much-needed success story for the FA and its National Game Strategy. Arsenal in the Community are to organise weekly training sessions and open-door events at the new facility. It is also hoped that local schools and youth associations will get involved too. Even the FA couldn’t have foreseen the tremendous social and footballing success the hub has delivered.

Although Market Road was the site of one of England’s first ever artificial pitches (first laid in 1972), it had become run down and in need of a major overhaul. In working to secure a £832,000 grant from the FA Facilities Fund and the Premier League, Islington Council has shown that local government and the elite of the game can work together for the good of grassroots football - and the communities it serves.