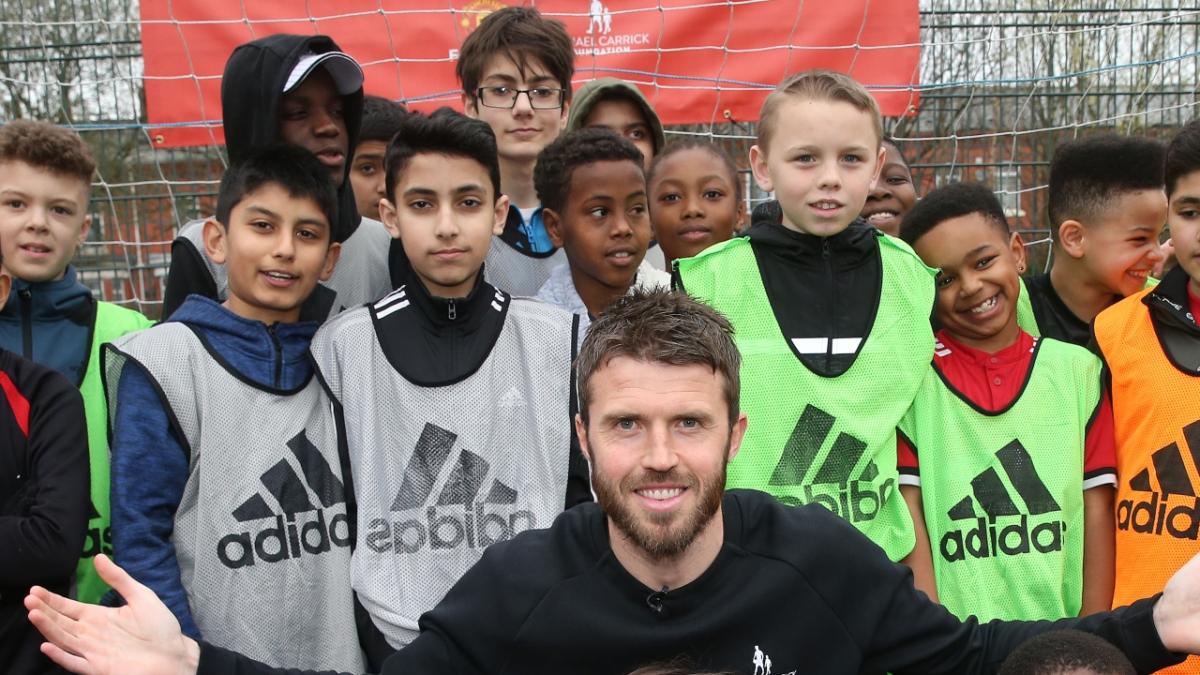 Michael Carrick has enjoyed an exemplary career — both on and off the field. Widely regarded as one of the country’s best passers, the Geordie midfielder has enjoyed huge success with Manchester United over the years. But more importantly, Carrick is a gentleman and a great ambassador for both United and English football in general. He’s the perfect role model for youngsters, which is why the news that he’s launching his own community-based football initiative is such great news.

Michael Carrick wants to give something back to the community that took him to its heart — which is why Carrick’s Street Reds is now open for business. The former Tottenham Hotspur midfielder launched his new initiative at Old Trafford Sports Barn last week. It has since emerged that the scheme will be funded by the Michael Carrick Foundation. Carrick was able to launch his own charitable foundation by using the money raised for his 2017 Old Trafford testimonial.

The quiet lad who started his footballing career at West Ham has big plans for his foundation — and Carrick’s Street Reds is just the first of several new schemes to be launched over the coming weeks. The idea behind this particular scheme is to offer kids in the most disadvantaged communities of Manchester the chance to be coached by professionals. As well as community-based coaching sessions, there will be the opportunity to learn new skills and work towards relevant qualifications.

The launch event was attended by dozens of local kids, and taking the first coaching session was the man of the hour. Michael Carrick has a clear passion for grassroots football, and he spoke about it during the event.

He said: "I know Manchester United Foundation has been doing some unbelievable work with this project for a while now but for my own Foundation, all the work that we’ve put in over the past few months, tonight shows it has been all worthwhile.

"It’s only the start for us but tonight is a momentous occasion in many ways so I’m immensely proud to be part of it, to help put it together – to see the smiles on the kids’ faces is priceless."

The impact schemes like this has on kids in local communities can’t be underestimated. Many of the children that attend sessions like these come from the poorest backgrounds in society. It’s not an exaggeration to say that the likes of Manchester United and Michael Carrick save some young people from a life of crime.

It’s also great to see Carrick spend so much of his own money and time in the city where he became a legend. Youngsters respond positively to initiatives like this, and often go on to take up football at a more structured level.

The Street Reds revolution continues to take Manchester by storm

Depending on which measurement you use, it’s not an exaggeration to call Manchester United the largest club in the world. The power and influence they wield in societies around the planet is being used as a force for good, and the kids of Manchester are the first in line.

Carrick’s Street Reds is just one of several Street Reds initiatives that have a growing presence in 12 different Manchester communities. Operating under the auspices of Manchester United Foundation, the initiative involves giving people the chance to play the game in a safe, structured environment. As well as top-level coaching, there is advice and guidance available for young people who want to become match officials and coaches.

As of mid April 2018, there were more than 16,000 regular participants in the Street Reds programme — of which an impressive 46 percent are female. So far, 64 qualifications have been awarded to participants, and 126 volunteers have signed up to help out.

Programme organisers regularly visit local schools to spread the word — which is just one reason why more than 3,000 children of primary school age take part in Street Reds activities on a regular basis.

Football clubs and elite players come in for a lot of criticism these days. There’s so much money in the game, and it’s easy to write off the game’s superstars as overpaid and detached from reality. But Manchester United, along with stars like Juan Mata, Michael Carrick and Paul Pogba have shown that the beautiful game can be used as a force for good.