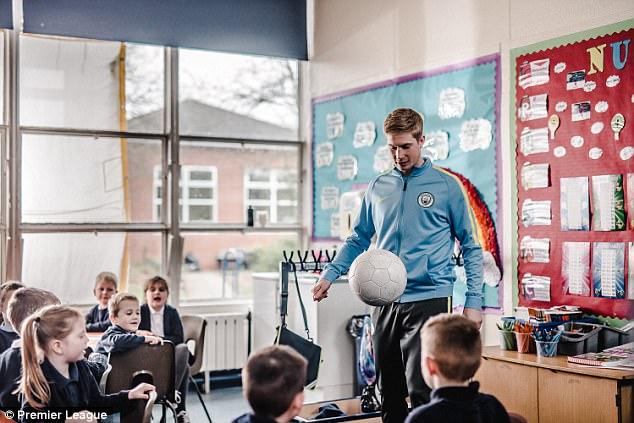 Most Premier League initiatives are aimed at furthering the reach of the brand or getting more people playing, so it was somewhat gratifying to see the World’s richest domestic football competition throwing its weight behind an education initiative this week.

Stars of the game getting involved

Some of the game’s brightest talents will spend the next two years visiting schools around England in order to extol the virtues of learning and education. The plan is to visit more than 10,000 primary schools in the next two years — something that should help to raise awareness about how important education is.

The launch featured a national campaign, and TV commercial and some of the game’s biggest names, including Jose Mourinho, Theo Walcott and Kevin De Bruyne.

The celebrities went into classrooms to talk about education, as well as show off a few of their silky skills. Gary Cahill even enjoyed a makeshift playground match with school children. Sadio Mane of Liverpool took a PE class, while Eric Dier demonstrated his IT skills to an adoring group of youngsters.

For the first time in a long time, the Premier League is using its most recognisable stars for the good of the community.  Of course, there is currency in such a show of social responsibility, but the real winners here seem to be the children — most of whom were awestruck beyond belief to meet their sporting heroes.

The initiative is aimed at boys and girls aged between five and 11. Resources are being provided to all schools in England and Wales to support the programme, including teaching materials for English, maths and PE.

It seems the concept has rather broad aims right now. The only real brief is to inspire children in their education, which is a noble goal that has the potential to change young lives.

The Premier League is being used as a force for good, but the elite organisation isn’t doing this just for the fun of it. This is a canny move aimed at securing the loyalty of the next generation. With relatively new competitors such as American football threatening the national game’s dominance, the Premier League needs to engage with youngsters to ensure its audience doesn’t shrink in the future.

"There are full materials for schools, it's clubs getting into schools with their coaches, it's free books, it's free kit, there are all sorts of stuff going on to try and make a big intervention in people's education.

"It's really unfair on the clubs that they don't get the deserved reputation for the work they do, an enormous amount.

"This is 88 professional clubs we've got engaged in these type of programmes. There's no other country in the world that does this to this level, or to this scale.”

A wealth of free teaching resources

The Premier League Primary Stars website is divided into sections for schools and parents. Families can nominate a school to take part in the programme, and school teachers can access essential teaching resources.

There are a series of training packs for PE, including “passing and throwing,” “balance and stability” and “intercepting.” Personal, social and health education (PHSE) is also part of the scheme, and training packs in this area include “resilience,” “play the right way” and “positive and happy playtimes.” More than 60,000 books are expected to be given away to schools as part of the education drive.

This innovative scheme also involves regular competitions, awareness campaigns and general advice for youngsters making their way through the education. At a time when the many footballers are being lambasted for the example they are setting on and off the pitch, it is fantastic to see football working FOR the community in this way.

It’s often all too easy to criticise our most famous footballers for their lavish lifestyles and bad behaviour on the pitch. But credit where it’s due: these multi-millionaire superstars are giving something fantastic back to their communities.