Should the FA Adopt the SFA’s Performance School Structure in England? 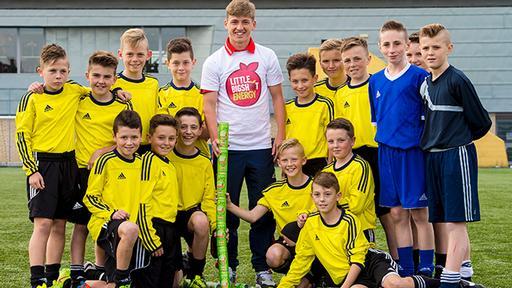 There is a huge debate raging across the UK regarding the best way to develop our footballers of the future. It is now widely accepted that we’ve fallen behind the likes of Spain and Germany in terms of technical ability, coaching and the production of well-rounded players. But the Scottish FA may have developed a new way of producing its future stars.

A group of young players recently graduated from the first intake of the Scottish FA Performance School. This comprehensive programme has football education at its heart - and it’s already proving to be a major success.

The Scottish FA Performance School was launched in August 2012 as part of the SFA’s elite player development programme. The first intake has finally completed the football education programme, which took place at seven different schools across Scotland.

To mark the occasion, the 83 students received their medal and certificate in front of an excited Hampden Park crowd - just before the recent Scottish Cup Final between Hibernian and Rangers.

A change of approach

The traditional route to the professional game in Britain involves lots of league action at school, county and club level. This new approach takes an holistic route - giving boys and girls the skills, mental attitude and education they need to perform at the very highest level.

The lucky 83 were able to continue their football education whilst continuing their studies and working towards their SQCs. Although this meant leaving their regular schools, the candidates were able to marry their football development and general education seamlessly. They were also given the opportunity to develop and grow with their teammates.

Each of the seven schools involved were assigned their own full-time football coach. Not only did the professional coach work to develop the players’ technical skills, they worked with education providers to ensure every candidate fulfilled their academic potential too.

The first intake was coached by former professional players, including Ian Ross, Greg Miller, James Grady and Brian McLaughlin. And according to the Scottish FA Performance Director Brian McClair, the scheme has been an unqualified success.

“In partnership with the clubs, the Regional Performance Schools have increased the opportunities for young players to practice the fundamental elements of our national game, all in a safe, enthusiastic and enjoyable environment that encourages and supports diligence, discipline and creativity.”

Selecting the most promising young talent in Scotland

Each year, the SFA will scour schools across Scotland in search of the most talented 12-year-old girls and boys around. The best candidates will be discovered at a series of football festivals and special selection days - using a combination of scouting reports, club reports and general feedback from coaches.

The chosen children will be given the opportunity to combine their development on the pitch with their schooling. So, instead of simply playing competitive matches at every opportunity, each student will be given an extra 800 hours of coaching over the course of the four-year programme.

This exciting scheme recognises that far more than talent is needed for a youngster to make it is a professional footballer. Equally as important is discipline, structure, focus and a commitment to continual improvement.

The children selected for the SFA Performance School have their football and educational development managed on a daily, weekly, monthly and annual basis - to ensure they become excellent footballers with their feet firmly on the ground. This approach gives every child the best possible chance of making it as a professional - whilst preparing them for a life outside of football.

Can England learn anything from the SFA’s Performance School?

In terms of the development of young players, England has been facing many of the same challenges that Scotland has encountered over the years. Although the FA hasn’t developed a direct equivalent to the SFA’s school programme, they do have the FA Secondary Schools Programme in place.

The English FA’s scheme isn’t as comprehensive as the one north of the border, and it relies on the voluntary cooperation of secondary schools around the country. Each school is given a teacher resource pack, help with marketing the programme and access to the FA Schools Portal for enrolment and help. But that’s really where the programme ends.

If the FA needs any evidence to demonstrate the need for such a programme in England, it only needs to look at some of the headline statistics. 20 of the 2012 Scottish FA Performance School intake have already played in Scotland youth international matches - that’s a hit rate of 25 percent. And 25 of Scotland’s league teams have already signed up graduates of the 2012 SFA Performance School. Perhaps most impressively, the majority of pupils have either signed professional contracts already or will continue their education until the age of 18.

The holistic approach to developing young footballers has been paying dividends for the Spanish and German national teams for many years now. The sooner the FA adopts a similar approach, the sooner we can all look forward to a more successful England team.