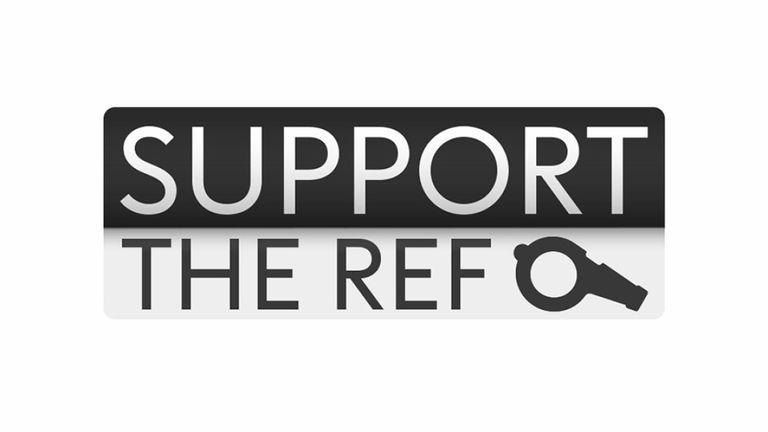 Referees at all levels of the game in Britain are leaving football in droves — and one of the main reasons is the torrent of abuse they’re receiving on a regular basis. A nationwide walkout of grassroots referees was narrowly avoided last year, but it could still happen if the FAs in England, Scotland and Wales don’t do more to protect our match officials.

To be honest, it’s not surprising to see our honest, hard-working grassroots referees being abused regularly. After all, our youngsters see elite professionals abusing referees on their TVs every week.

Sky Sports is now saying “enough is enough”. Following the success of last year’s event, the Support the Ref Week once again spread the word about the great work match officials do at every level of the game. March’s event was more successful than ever, and it gave even more people an insight into what life is like for referees.

A series of investigations, reports and interviews gets right to the heart of the issues of the day. Fortunately, it’s not all doom and gloom. There is advice for youngsters looking to become a referee, as well as in-depth analysis on hot topics such as the VAR system.

Crucially, Sky Sports makes Support the Ref week an interactive experience for all of us. A major survey assesses the state of refereeing today, and gives fans, players, coaches and even the English FA an opportunity to comment on the results.

There was a lot of very useful — and often fascinating — data to come out of the event. For example, the referees themselves believe that the continued bad behaviour of professionals is having a knock-on effect at grassroots level. Nearly 3,000 refs were asked for their opinion on a range of issues, and a huge 91 percent said they thought a lack of respect from players towards officials was either a big or a fairly big problem.

But it wasn’t just the players who were roundly criticised. A huge 76 percent of grassroots referees believe that the behaviour of elite managers and coaches is a huge problem — for every level of the game.

The referees were also asked why no British nation nation would be sending a referee to the 2018 Russia World Cup. When asked directly, Mike Riley explained that the issue was caused by bad time. Mark Clattenburg was selected by FIFA for the World Cup, but his resignation from the Premier League ended his involvement.

We also learned an awful lot about where refereeing is in terms of diversity and representation. Sky Sports aired an exclusive interview with the first openly gay professional referee in the UK. Fortunately, Ryan Atkin was happy to report that he’d received no homophobic abuse. Let’s just hope it stays that way.
At a time when the English game in particular is struggling to attract young referees from all areas of society, there was a heavy focus on female referees and those from BAME backgrounds. While more black, Asian and minority ethnic referees are coming into the game, things are changing slowly. It’s clear that more needs to be done to ensure our match officials are more reflective of the society we all live in.

Rule changes asked for by the public

Perhaps some of the most exciting and fascinating arguments to take place during Support the Ref Week centred on various mooted rule changes. For example, viewers voted overwhelmingly in favour of giving elite refs a mic to allow us all to hear exchanges on the pitch. There was also support for introducing a rule insisting that only captains are allowed to approach the referee to make a complaint.

Crucially, around 80 percent of people who took part in the main survey want players to be allowed to celebrate goals how they wish. There are concerns that stopping players from twirling their shirt around their head or jumping into the crowd after scoring takes away a little of the excitement British football is known for.

There was also broad support for making referees face the cameras after a match — in the same way coaches are forced to. Perhaps seeing referees admit when they’re wrong would go some way to improving their image… and reducing the abuse they receive.

Other rule changes supported by voters in the Support the Ref survey included limiting VAR challenges to three per team, sin bins for some yellow cards, rolling substitutions and 60-minute games that involve stopping the match clock every time the ball is out of play.

This level of discourse within the game can only be a good thing. The more empathy we all have for our referees, the easier their job will become — and that will inevitably lead to more youngsters showing an interest in becoming match officials at every level of the game.