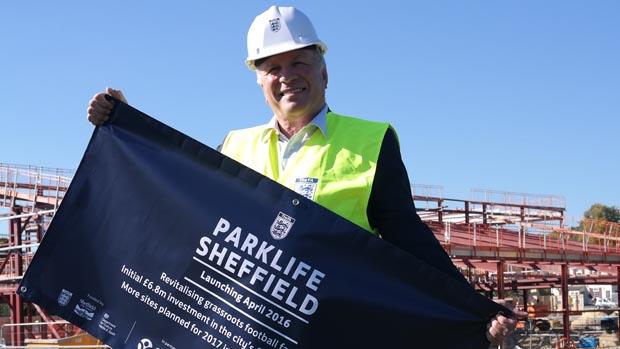 After many years of fending off criticism about their approach to grassroots football in England, the FA’s biggest initiative to date made a huge splash in the press this week. The Parklife Football Hubs Programme arrived in Sheffield - the home of football - and it was welcomed across South Yorkshire as the next step to increasing participation levels in the region.

As part of a nationwide programme costing £200m, the launch of Sheffield’s first ‘Football Hub’ could be the sign of great things to come for community football in England. But then again, it might be yet another attention-grabbing PR stunt to distract people from the FA’s real failings.

The Lord Mayor of Sheffield and Sports Minister Tracey Couch were there to open the new facility, along with representatives from Sport England and the FA. Heralded as an example of ‘the FA’s commitment to football for all, the hub consists of pitches, facilities and various participation programmes.

FA Chief Executive Martin Glenn was in attendance for the grand opening, and he used the platform to announce plans for an expansion of the Parklife scheme. He wants hubs to be built across England’s urban heartlands over the next five years. While this is a laudable commitment, it does seem more than a little premature — given that the success of this particular scheme won’t be measurable for several years.

The FA also announced a new bidding process, consisting of a three-month campaign to secure FA funding for more Parklife hubs across the country. Planning permission has already been granted for more hubs in Liverpool and West London, so it’s safe to say that other major cities in England will be keen to get in on the action.

Sheffield was chosen to be the first city to open a Parklife hub because of its status as the spiritual home of football. Given that association football was invented in the city, this decision does seem fitting. And already, sites in Graves, Thorncliffe and Westfield have secured Sheffield’s unofficial status as the home of grassroots football.

While Westfield is currently under construction, hubs at Graves and Thorncliffe are already playing host to league matches for five local clubs each. Their games are being played on 4G artificial surfaces, which should help to greatly reduce the number of postponements during the winter months.

What’s under the hood of a Parklife Hub?

The FA’s Parklife hubs have concentrated on installing artificial pitches, rather than traditional turf pitches. And it’s easy to see why. A reasonably maintained grass pitch can accommodate up to eight hours of match action a week. A 4G pitch, on the other hand, can handle that much play time in a single day. And when you factor in maintenance costs, it really is a no-brainer for the FA.

All of Sheffield’s hubs are fully accessible in line with current disability legislation. And they have been designed in a way that makes them suitable for other sports. Each hub is kitted out with pristine changing facilities, indoor training facilities and private meeting rooms.

Although the money for Sheffield’s Parklife hubs came from the FA, the ongoing costs associated with running and maintaining them will lie with the newly formed Sheffield Football Trust. This not-for-profit organisation will run each hub as a business, which should ensure they are self-sufficient from day one.

The start of things to come

The FA has set aside an initial £200m for 30 hubs in towns and cities throughout England. The first round of funding will be distributed via a bidding process. Local authorities will initially be asked to express an interest in hosting a hub, but to qualify, they must govern a region of more than 200,000 people. This means more than 80 local councils in England can apply.

Throughout November, local councils will start their bids for funding at three separate national workshops, in Bisham Abbey, Coventry and Sheffield. These events will allow councillors to learn more about the initiative, and to talk to representatives from the FA, the Premier League and Sport England.

The official goals for the Parklife Football Hubs Programme are as follows:

There is no doubt that this level of investment is very impressive. These stunning new facilities will help a lot of clubs fulfil their fixtures and attract new players… but how many clubs will benefit? Five clubs can be accommodated in each of Sheffield’s new hubs, but there are hundreds of clubs in South Yorkshire and the Midlands facing extinction because of poor pitches or crippling pitch fees.

Local clubs don’t need state-of-the-art anything. They simply need a quality pitch and somewhere clean and dry to change and conduct indoor activities. The Parklife Football Hubs Programme will undoubtedly make headlines, but will it get the nation playing the game again? And is it a cost-effective way to improve grassroots facilities for as many people as possible? Only time will tell.