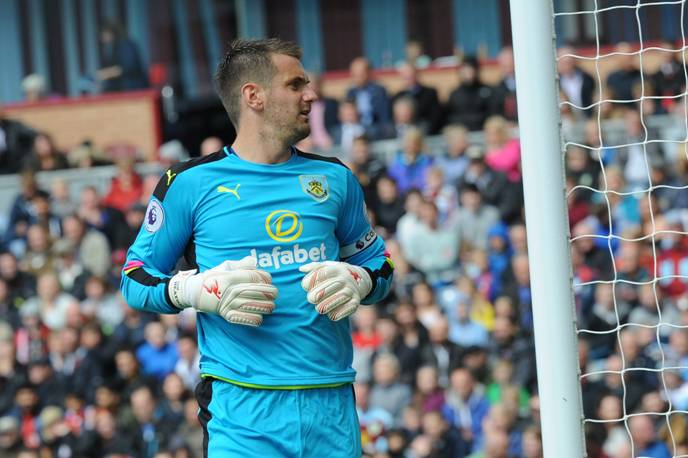 Tom Heaton has come a long way since his days as a trainee at Manchester United. The Burnley stopper’s time at United didn’t involve much in the way for first team action — although he was in the travelling 24-man squad for the 2008 Champions’ League final in Munich. After leaving Old Trafford on a Bosman free transfer, Heaton joined Cardiff City, and his career has gone from strength to strength.

But for a while, Heaton was worried that his career wasn’t going the way he’d planned. Despite having been a regular for Manchester United reserves, Alex Ferguson favoured Edwin van der Sar and Tomasz Kuszczak. With virtually no opportunities for first-team football, Heaton was forced to go out on loan. He impressed at the likes of Cardiff, Rochdale and Wycombe Wanderers, but stints with Royal Antwerp and Queens Park Rangers weren’t quite as successful.

Standing Out in a Poor Bristol City Team

Heaton was making a name for himself in England’s Championship and League One, yet he was still struggling to get the permanent move he was so desperate for. Following talks with Watford broke down in 2012, Heaton was invited for a trial with Bristol City. After just a few weeks, he was signed on a 12-month deal, with an option for a further year.

During his time at Ashton Gate, Heaton made 43 appearances, and earned a reputation as a solid, dependable and accomplished performer. Bristol City were relegated from the Championship that year after shipping an astonishing 84 goals, but Heaton was one of the club’s top performers. To stand out as a keeper in a team with such a miserable defensive record demonstrated his ability, which is why Sean Dyche and Burnley came calling.

Making a Name for Himself at Burnley

Following his tumultuous year at Bristol City, Heaton made a permanent switch to Burnley in May 2013. The Chester-born goalkeeper has come a long way in a relatively short time. He may be approaching his 31st birthday, but that’s still relatively young for a modern keeper in the Premier League. A series of exceptional displays and a fantastic attitude has won him many admirers. According to some reports, Liverpool, Manchester City and Everton are all keeping tabs on him. The man who has made more than 150 league appearances for Burnley since 2013 is now a hot property, and Sean Dyche will do well to keep him at Turf Moor beyond the end of this season.

Despite a rocky start to a career that involved far less action than he would have hoped, the talented keeper is now one of England’s best and brightest. Having captained Burnley since 2015, Heaton is now an England international and one of the most consistent performers in European football.

After a whirlwind two years that has included a Championship title and a full England debut, Heaton is now entering another exciting new phase of his career. The former Manchester United apprentice recently signed a four-year contract to become the new face of Precision Goalkeeping. His new role will entail developing both the brand in general and his own goalkeeping glove range.

Precision Goalkeeping has an international reputation for creating effective and innovative gloves for professionals and amateurs alike.

Heaton is very excited about this new endorsement deal.

“I am delighted to be joining Precision Goalkeeping and wearing their gloves for the upcoming seasons. They have been outstanding in creating a specific glove that’s tailored to my exact needs.

“They’ve allowed me to share my input, thoughts and creativity into the gloves, which is very important to me. I am excited to be a part of the brand and I am looking forward to working with them for years to come.

“Precision is a relatively new brand in terms of history, but it is one that is certainly on the up.”

The latest Precision goalkeeper gloves, sportswear and accessories are available to buy from The Soccer Store.