Training on Your Own 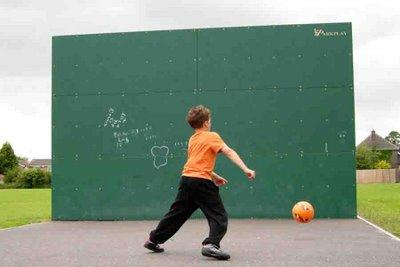 Does anyone remember their younger days? Football in the streets or a park from first light to last. We all have fond memories of those days but drive past any park today and it is highly likely that there won't be a football in sight! You will also struggle to find anyone playing in the street. Kids just don't do that these days.

Thinking back to my youth, we played matches against each other all the time, which were usually 20 kids versus another 20! We also, to pass the time and beat boredom, played informal football games like Worldy, Wally, and Headers and Volleys. We may not have realised it at the time but those games taught valuable football lessons and again, I don’t see many kids playing them these days.

Instead, there are a number of kids who play football several nights a week via coaching sessions, which are usually fun, safe and well structured. Here they learn to a curriculum or plan, facilitated by adults.

However, by learning and only playing football this way, are kids missing out by not playing informal games with their friends in an unstructured environment?

As kids are obviously still playing matches on Saturdays and Sundays, this post focuses on the technical areas informal games encouraged and where kids these days are perhaps missing out compared to the previous generation.

The post isn’t all doom and gloom though, it also provides helpful hints on how the technical areas can be replicated at home on an individual basis (where possible) using some basic equipment. Sometimes you just need a ball!

This game went by many names, but the premise was always the same. There was one goal and one goalkeeper and each player was their own “team”. It sometimes took 15 minutes for each individual player to tell the group their “team” name! The rule was simple, you had to score 1 goal to go through to the next round and the last player to score was eliminated. This process continued until there were two players left and then two goals had to be scored in the final to win the World Cup.

So, what did this game encourage?

Pulling the Ball Out of The Air

The game would always start and re-start with the goalkeeper either throwing or kicking the ball into the air. The player who could pull the ball out of the air properly was the first to get the ball and the first to attack. When you are watching your next grassroots game, you will see the number of kids who struggle with this skill these days.

Replicating this at home is simple - throw the ball in the air and control it with the top of the foot. When doing so, make sure you don’t bring your foot to the ball, let the ball come to your foot, and make sure you withdraw your foot on contact so the ball is cushioned.

Alternatively, juggle the ball, which will really help your touch.

As each player was on their own, they had two choices in this game; dribble their way through everyone or hang about the goal (be a "goal hanger") and get on the end of rebounds. The dribblers had to get past multiple people before getting their shot away. To do this, you didn't learn lots of moves, you perfected one or two and applied them over and over again in the game. You also worked on finishing while on the move.

If you were a goal hanger then you worked on your reactions and finishing. Many a poacher was made from this game!

To replicate this at home, throw down some cones (or jumpers, shoes, anything!) and dribble around them. Try to go as fast as you can while keeping control of the ball.

You can also use some mini goals to practice your finishing at the end of the dribble.

Dribbling around multiple defenders was tiring stuff. You still needed to have enough energy at the end of the dribble to produce a quality finish. If the finish was too near the goalkeeper and he saved the shot, the goal hangers would "steal" your goal and go through to the next round!
When you are doing any training, make sure you do it at 100% so not only are you learning, but you are tiring yourself out while doing so. This will help your fitness and make sure you have enough energy in the later stages of matches.

When trying to dribble around multiple players, you needed to be aware of where the space was and where the other defenders were. If you weren't aware of these things then as soon as you got past one player, the next player was taking the ball off of you.

Only one player at a time had the ball, the rest were defenders. During the games, some defenders were pressing and some were covering. This wasn’t coached but came naturally as if everyone pressed then the faster players just used their speed to get past everyone.

You also practised your tackling skills, but not your slide tackles as you didn’t want to win the ball while lying on the ground! You needed to win the ball standing up (block tackles) so you could attack immediately after winning it.

This game only required a ball and a wall (or other hard area). The rules were simple, each player took turns at kicking the ball against the wall. If a player missed the wall, they got a letter of the word WALLY, and when a player received all the letters they were out of the remainder of the game. The winner was the last player remaining.

This game encouraged the following:

Your foot speed had to be fast in this game to reach the ball before it got too far away from the wall. The game also made you think about your football movement (shuffling side-to-side).

Speed Ladders are a great way of improving your foot speed. Alternatively, practicing toe taps on the ball will improve this as well. See how many you can do before getting tired.

You needed to have good balance when reacting to where the ball went and to pass it off the wall on the move.

This one is self-explanatory – when the ball came off the wall, your first touch was worked on when you returned it. Your touch had to be perfectly placed or it was an easy shot for the next player.

Use a wall or football rebounder and keep kicking the ball off of it to work on your touch.
Bonus Tip: Before the ball comes back to you, quickly look over both shoulders to “check the space”. In a game, you would be looking to see if there are defenders coming to close you down so this simple exercise will replicate that.
Accuracy

Football skittles is a good way to improve accuracy - place a spare ball on a cone and step back 20 – 30 yards, aim for the ball and try to knock it off the cone with a pass/shot.

Very simply, one player crossed the ball and the other players attempted to score with a header or volley. The last player to score was eliminated or became the crosser.

This game encouraged the following:

The player crossing the ball was getting lots of practice at crossing. The crosses needed to be in the air and accurate or you wouldn’t get to be the crosser and just get eliminated from the game, which was not fun!

If you have some slalom poles then you can cross the ball in the air, trying to hit the pole. You can move the pole around to different areas so you need to vary the depth and pace of your cross.

Alternatively, if you have a home goal then you can cross into the goal to work on your accuracy. Just make sure you are crossing into the goal from a wide position so it is realistic.

When the cross came in, you got lots of practice at reading the cross so you could meet it with a header or a volley. If the cross was behind you then you had to adjust your position to meet it. I can remember watching the crosser’s foot shape to try and second guess what kind of cross it was going to be.

To score from a cross with a header or a volley took good timing, good technique and plenty of practice. These days lots of kids run out of the way of the ball when it is crossed!

Reading crosses and practicing headers and volleys at home is difficult. If you have a parent or friend to help then they can throw the ball in the air from a crossing position for you to practice this.

The Need to Practice

Children are spending less time outdoors when compared to their parents so naturally, kids are getting less unstructured playing time. The attraction of new entertainment delivered via technology, and a changing society, are playing a part in this, as well as grass pitch closures - https://www.thesoccerstore.co.uk/blog/latest-news/hundreds-of-local-football-pitches-close-across-the-uk-in-a-decade/

These factors can be overcome, using some of the coaching tips above, and any other ones you can think of. This will help them practice some of the under coached areas that the older generation practiced naturally through playing games.

What do you think? Is there still a need for kids to play, and learn, away from a structured coaching session, or are they getting all of the football education they need in these environments? Let us know in the comments.