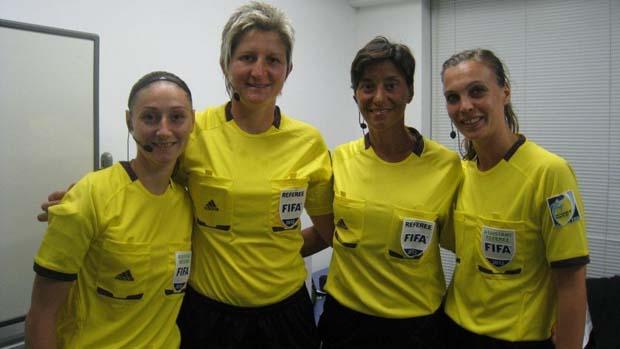 Ladies’ football in England is currently riding the crest of a wave. The incredible performance in the last Women’s World Cup, the growing popularity of the Women’s Super League and a string of endorsements and TV deals has given the game a much bigger profile during the last few years.

At a time when the number of boys and young men playing the game regularly is falling, participation levels in the girls’ game are skyrocketing. There is no doubt that this is a golden era for ladies’ football in England. But let’s not get carried away: compared to the men’s game, it is still a pauper.

While revenues at the top of the women’s game are soaring, there seems to be a common problem that is threatening the game’s growth. There just aren’t enough referees and coaches at grassroots level.

And as a result of the dearth of female coaching and refereeing talent in the amateur game, women are desperately under-represented at the professional level.

The laws of the game are the same for both gender-variants, and the demands on both referees and coaches are, more or less, the same too. It’s interesting to note that boys and girls, men and women all have to take the same training courses in order to qualify as an FA referee. There are no rules that dictate men and women officials must stick to games featuring players of the same gender, so what is happening?

The truth is quite simple: girls aren’t being given the encouragement they often need to pursue a career in coaching or refereeing. And when girls do show an interest, they’re simply not being taken seriously enough. To add to the problem, schools - particularly at primary level - are failing to cater to girls when it comes to the national game. Indeed, some schools have no girls’ football whatsoever.

The old adage that ‘girls just aren’t that interested in football’ no longer has any credence. Participation levels throughout the UK have never been higher. The fact remains that, in Britain, football still has an image problem; it is still the enclave of the working class man - at least at grassroots level.

It seems that everything needed to increase the number of female referees and coaches is in place - except attitudes. Just recently, Czech players Lukas Vacha and Tomas Koubek were sent to play with Sparta Prague’s ladies’ team after ‘insulting’ a female assistant referee at the end of a match.

Annoyed with a decision made by the female official, Koubek reportedly said:

“In my opinion, women should stay at the stove and not officiate men’s football.”

Sadly, these instances are common. England has a serious shortage of women referees. While Sian Massey-Ellis has made it to the Premier League as an assistant referee, the abuse she has received from some fans has been nothing short of disgraceful. Until Sian and other female officials are allowed to be in charge of top-flight matches, these attitudes will not change.

All too often, women in the game are treated like second-class citizens, and this serves as a deterrent to young girls thinking about a career in football. Who could forget Chelsea’s doctor Eva Carneiro, who was publicly humiliated by Jose Mourinho after doing her job by giving an injured player some treatment? Would she really have been treated this way had she been an experienced male doctor?

There was also the case of Helena Costa, who showed great promise as a professional coach in the men’s game. She was forced to quit - despite being the first woman to manage a professional men’s team. Costa cited discrimination by her colleagues at the club as one of the reasons for her resignation.

Football is all about role models. If young girls don’t see strong, talented and confident women in top roles within the game, who is going to inspire them to get involved? Where will our future female officials, coaches and players come from? Until we tackle the sexist attitudes that are still rife in the national game, it will remain the preserve of men - and that can’t be good for a 21st century society.