Will the FA's new Codes of Conduct Improve Player Behaviour? 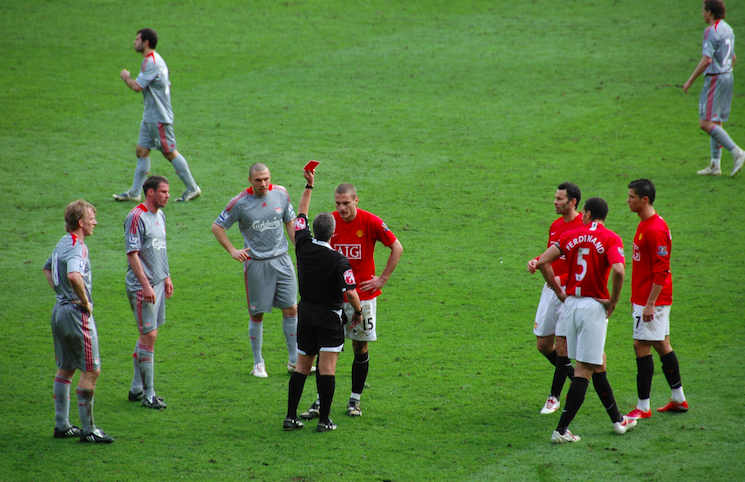 The sight of angry professionals surrounding Premier League officials to contend decisions has become commonplace in recent years. While players are often reacting to the enormous amount at stake in the modern game, there can never be an excuse for confrontational, aggressive and abusive behaviour aimed at our referees.

Yet week in, week out, we see this scenario play out on Premier League grounds all over England. Whether they like it or not, multi-millionaire superstars of the game have a social responsibility to act like decent human beings on the field of play. But all too often, they attempt to take out their own frustrations on hard-working referees in a way that is often replicated by impressionable youngsters.

This problem has been getting progressively worse for many years - and it is an issue that seems to be associated with football. We simply don’t see this kind of bad behaviour in our other national sports: rugby and cricket.

So why does this problem exist, and can anything be done to tackle it? Well, the FA believes it is a cultural problem that starts at a very early age. Such is their concern about this growing issue, they have joined forces with the Football League and the Premier League in an attempt to remove persistent abuse and the intimidation of match officials from the game.

All three of England’s professional governing bodies have released a statement calling on professional match officials to dish out harsher punishments to players who act in an intimidating or abusive manner.

Crucially, the laws of the game have been changed ahead of the 2016/2017 season. Referees now have new powers to tackle bad behaviour on the field of play. Dissent towards match officials will be treated much more harshly from now on. Yellow cards can be shown to players who act in one of four different ways:

These new powers will probably lead to a huge increase in the number of sendings off and suspensions during the first half of the season, which could do some harm to the spectacle of the Premier League in the short term. But the changes should help to modify player behaviour over time.

Referees will also have new powers to deal with the use of offensive, insulting or abusive language. A straight red card can be issued under these circumstances. It will be up to the discretion of the referee to decide what constitutes unacceptable language.

Another unwanted behaviour that has been slowly creeping into the professional game is physical contact with match officials. In its mildest form, this could be a simple tug of a shirt to get the referee’s attention. However, from this season, such behaviour will be rewarded with a yellow card. And if the contact is deemed aggressive, a red card can be issued.

How many times have we witnessed Manchester United, Chelsea, Arsenal or Manchester City players surrounding a referee in an attempt to get an initial decision overturned? Well this childish behaviour is being outlawed. When two or more players surround a referee, at least one of them will be issued with a yellow card. And the FA reserves the right to sanction clubs that cannot control their players.

Managers and coaches have not escaped the FA’s new Codes of Conduct crackdown either. The existing behaviour guidelines for coaches in the technical area will now be more rigorously enforced. And recent concerns about the relationships between certain managers and match officials are being addressed with a new stipulation that referees must maintain a professional detachment from players and club staff.

The FA’s Codes of Conduct have been in place for many years, but this tightening of the guidelines looks set to change the face of the game in England - almost overnight. Premier League Chairman Richard Scudamore is confident that the changes will have the desired effect.

“Premier League football and English football is known at home and abroad for being competitive and compelling, but also played in the right spirit.

“We and our clubs have been discussing for some time concerns that certain elements of player behaviour are overstepping the mark – the mass confrontations, overt displays of dissent and offensive language. We are viewed by millions week in week out – including lots of young people – and it is our collective position that these types of behaviour should no longer be tolerated.

“That is why the Premier League, EFL and FA have tasked the Professional Game Match Officials with confronting these type of incidents and issuing appropriate sanctions in the form of cautions and sending offs.

“Things happen in the heat of the moment during fast and highly competitive football; we still want to see the passion fans enjoy and demand, but players and managers have to be aware there are lines that should not be crossed.

“That is why we are working together with our EFL and FA colleagues to promote positive behaviour from all participants in the game.

“This shift in emphasis will involve PGMO referees responding more directly to these incidents and we will be communicating this to our managers, players and fans over the summer, ahead of what we hope will be another fantastic season of football."
There are prominent coaches and players within the game who believe that these changes are unnecessary. They are of the opinion that this type of behaviour is part of the game, and that it adds to the tension… the spectacle.

But the real issue here is how the behaviour of privileged professional footballers who should know better is rubbing off on children. Our youngsters see this awful behaviour on their TV screens, and they emulate it in their local league or school matches the following week. This causes misery for players, match officials, coaches and parents alike, and it threatens to turn kids away from the game before they’ve had a chance to develop their talents.

The FA’s drive to improve player behaviour is to be applauded. If we can foster an atmosphere of respect and discipline on professional football pitches, promoting the same values in parks and schools should become a lot easier.