How to Stay Match-Fit at Christmas 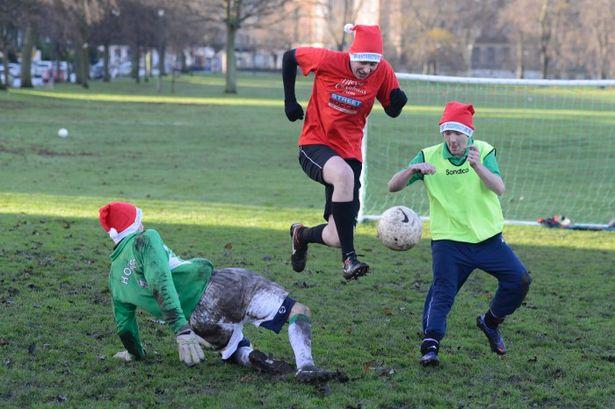 Whether you play for a local pub team or for your county, the festive season represents a time of temptation and bad lifestyle choices. Christmas parties usually mean alcohol and tasty treats are never far away, but that can spell disaster for your performance levels if you have a busy festive period of match action ahead.

Too many footballers attempt to deprive themselves of all the festive season’s indulgences, but that often results in morale issues, and in many cases, a fat and alcohol-fuelled binge at a later date. It is possible to stay match fit and enjoy a happy Christmas – it just requires some planning and a great deal of discipline.

Stick to your exercise regime

Try to avoid the temptation of over-compensating for calories you haven’t consumed yet. Too many young footballers believe that working harder and for longer during the approach to Christmas ‘banks’ them calories for alcohol and unhealthy foods during the party season. Unfortunately, the human body doesn’t work that way. Over-exerting yourself could leave you dehydrated, lacking energy and underweight, so stick to your usual exercise and training routines throughout the festive season.

You should always avoid alcohol within 48 hours of a match, but that doesn’t mean you can’t enjoy the odd tipple or two between games. If you really must drink alcohol, try to drink lots of water at the same, and stick to the government guidelines on daily consumption levels. Wherever possible, stick to low-carb drinks, and if you drink wine, opt for spritzers with soda. Remember, you can enjoy healthier alcoholic drinks by choosing fruit-based cocktails. Whatever you choose to drink during the festive season, be aware of how many units you’re consuming. A half-pint of beer is usually around one unit, and a large glass of wine equates to three units.

Take every opportunity to get moving

It is almost inevitable that your calorie consumption will increase during the Christmas period – unless you are exceptionally disciplined. On the days that you probably won’t be training, take every opportunity to grab some exercise and burn of those excess calories. If someone has bought an activity-based gift, set it up and get moving. This could be something as simple as a game of Twister or a Nintendo Wii. However, it could be something a little most challenging, such as a portable football goal or a table tennis table. And don’t forget that an hour spent dancing could burn off more than 500 calories.

Several late nights during the festive season, as well as intermittent sleep as a result of alcohol consumption, can take a heavy toll on your fitness. A lack of sleep is known to increase stress levels, as well as reducing energy levels. So, when it’s time for a match or a training session, you simply can’t give one hundred percent. By all means, enjoy the festivities throughout the Christmas period, but know when to call it a night. If that means missing out on the fun, that’s the price you must pay for being involved in football at a competitive level.

Concentrate on speed and endurance work

If you don’t have many matches throughout the Christmas period, it is essential that you maintain your levels of sharpness, stamina and speed. Although it’s not usually a good idea to change your workout and training schedules during the Christmas period, you should be able to keep yourself in match condition by completing speed-endurance drills with your teammates. Set two training cones in a straight line – five metres apart. Then, set a third cone at a distance of 30 metres. You should jog the first five metres between the first two cones, and then sprint from cone two to cone three. If there are several of you taking part, set four different sprinting areas – with the distance between cone two and cone three increasing by 5 metres each time. One drill should include completing all four sprints.

There is no hidden formula when it comes to dietary choices during the festive season. Try to stick to your normal eating patterns as much as possible, and limit your intake of salt and fat. If you indulge in the odd treat or two, try to count your calories – making sure not to overshoot your daily allowance by more than two or three hundred. If you want to enjoy Christmas buffets and snacks, stick to pickles, nuts, plain popcorn and raw vegetables such as celery and carrot sticks. And if you want to enjoy dips, stick to salsas and hummus.

The worst thing you can do is starve yourself throughout the day in readiness for a large meal during the evening. You should try to eat little and often throughout the Christmas period, otherwise your metabolism may slow down. And whatever you do, don’t skip meals, as this could result in your body turning to your muscle for the energy it needs.

It is possible to enjoy a treat-filled Christmas whilst staying match-fit, but it will take some careful thought and a great deal of will-power if you’re going to pull it off.