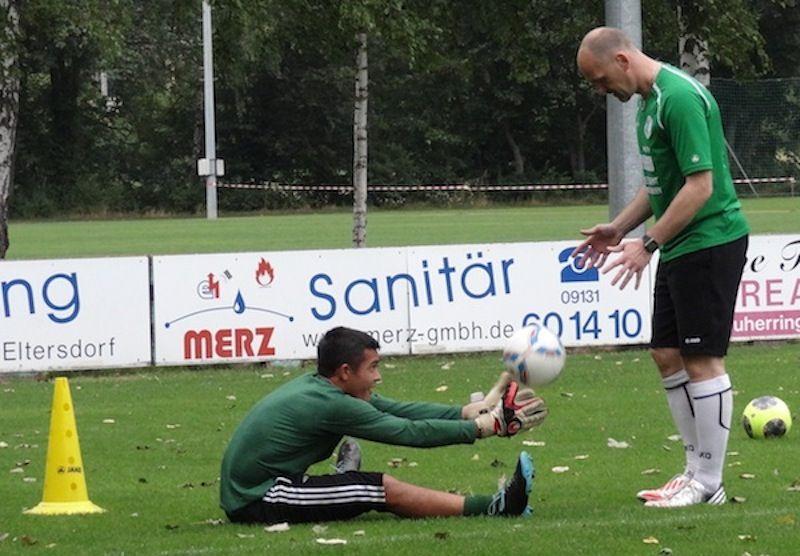 Improving as a goalkeeper involves working on reflexes, agility, leg speed, decision making and hand-eye coordination. In order to hone these skills, lots of practice and constant repetition are required – sometimes in an environment that recreates the intensity and often chaotic nature of a real match. There are five drills for goalkeepers that can develop all of these skills if utilised as part of a comprehensive training regime.

Defending crosses is one of a goalkeeper’s most vital roles, so it’s important to practice the art in a pressurised situation. Start this drill be creating a 15metre by 15metre square using training cones. Your goalkeeper and two attackers should start in the middle of the square, and an outfield player should be positioned at every cone – which should be numbered one to four. The coach then calls out numbers at random, and the player at the corresponding cone should kick a high ball in the direction of the keeper. The attackers in the square should attack the ball whilst the keeper tries either to catch it or punch it to safety. Numbers should be called at random for two to three minutes at a time.

This relatively simple drill requires the use of standard goal posts and a clearly defined penalty area. The goalkeeper should begin on the goal line, and an attacker should start around 40 yards away. The attacker starts by playing the ball forward around – choosing which direction to run in. The second touch must be a shot, and it must take place around the ‘D’. To make things more interesting, two more attackers should be introduced at a later stage. The first attacker should lay a ball off to the second, who must then pass to the third attacker before he takes his shot – once again on the edge of the ‘D’. Get your attackers to change angles and mix things up a little, and make your goalkeeper deal with a range of shots from different directions. This drill is a great way to develop shot-stopping skills and positioning.

3. Defending the one on one

Set up a standard goal post and place a training cone 12 yards from the goal line. Place two further cones 18 yards from the goal line – one six yards to the left of the first cone, and the second, six yards to the right. Your goalkeeper should be on his line, and your attacker should be at the first cone – with his back to goal. Place a passer at cones two and three, and set them up with a dozen balls each. The drill begins with a passer making a simple pass to the attacker at the first cone, who must turn quickly with the ball and head for goal. The keeper must attempt to narrow the angle for a potential shot, keep his eyes on the ball and remain on his feet whilst the attacker is still in possession. An attempt must be made to attack the ball and stop the attacker from scoring.

This is a very simple drill that simply requires a standard goal post and a penalty spot. An attacker should take a series of penalties – taking care to vary pace, direction and style with every spot kick. Train your goalkeeper to watch the penalty taker’s body language and approach; experience will give the keeper an insight into where a kick might be headed. For instance, a particularly wide approach may indicate that the shooter is going to take a shot in the opposite direction, and a straight approach means the shot is far more likely to stay central. Train your keeper to keep an eye on the shooter’s planted foot, as the direction it is pointed in could be an indication of where the shot is headed. Another potential give-away is the shooter’s hips. Get your keeper to watch where hips are pointing at the moment the shot is taken – hips will often open up into the direction the ball is headed when a ‘passing’ shot is being taken.

This drill is a great way of giving both your keeper and your strikers some quality ball time on the training pitch. Set up a makeshift goal using two cones about 12 feet apart. You will need several balls for this drill, and lots of spare coaches or players to retrieve wayward shots. Standing around 12 yards from the keeper, there should be two attackers on either side of the goal. The first player takes a shot, and the keeper must spring to his feet, swivel 180 degrees and attempt to stop the shot from the second player. The keeper then gets up once again, and turns to the first attacker in order to stop the next shot. This can be a draining experience for a keeper, so it shouldn’t last for more than two or three minutes. However, if performed regularly, it should hone your goalkeeper’s agility, reflexes, leg strength and decision making skills.

There are literally dozens of goalkeeping drills to choose from, but it’s important to choose a programme that gives your player an all-round skill-set. Repetition and variation are the keys to success.