Pre-Season Fitness: Get yourself fit for the new season

Another football season is finally upon us, and hitting the ground running on the pitch could be the key to glory in May. However, a relaxing summer and a few indulgences may have left you less than match fit, and you may be facing an uphill task to get into shape before the big kick-off. Slowly build your fitness levels by breaking them down into individual components, and you should be able to perform at your best from day one of the new season.

Stamina should be your priority

Physical stamina is the key to maximising your performance on the pitch. Being just one step behind the opposition players could leave you and your teammates at a disadvantage – which could prove telling over 90 minutes. The quickest way to build up your stamina levels during the weeks before a new season is by running.

Start your pre-season with 20-minute runs, at least three times a week. Remember, speed is not crucial at this stage, but you should be able to maintain a consistent jogging pace – you should also be adding at least five minutes to every session. By the time the first match kicks off, you should have the stamina to run for at least 60 minutes without taking a break.

Work on your power

Power is the key to so many manoeuvres on the pitch, including going past opposition players, leaping into the air to head a ball and winning the 50/50 tackle. In order to train your nerve and muscle fibres for powerful bursts of movement, you should be taking part in plyometric exercises from the moment your pre-season begins.

During the course of the average match, it’s unlikely you will ever sprint for more than ten metres, so you should use that distance as a guide for your pre-season power training. Set your training area by placing a marker five metres from a designated starting marker. A third marker should be placed a further five metres away. You should be left with a 10-metre sprinting area defined by three markers.

Start your drill by lying flat on your stomach at the middle marker, then spring onto your feet and sprint to the first market (five metres away). Sprint back to the starting marker, and then spin around and sprint to the 10-metre marker before returning to the start. Repeat this at least five times to start with, but you should be increasing the number of reps each week as the new season approaches.

Identify the areas of your body that need work 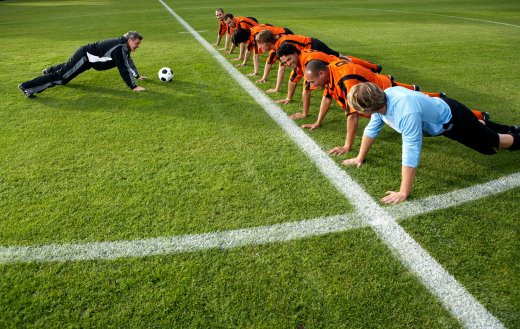 Players have different strengths and weaknesses, and the key to honing your own match fitness is identifying where you strengths and weaknesses lie. For instance, you may have a naturally powerful lower body, but your upper body may require a lot more attention. Divide your body into four sections, and perform the following exercises once a day during the pre-season. Identify where your weaknesses lie, and increase the intensity and regularity of training for those areas of your body.

Work on your balance

Balance is the key to staying in full control of the ball during the cut and thrust of a match, and your balance requires the training of key muscle groups. A stable stature during play will improve the accuracy of your tackling, passing and shooting, so it’s important to be ready from the moment your season kicks off.

A great way to develop your balance is by standing on a level surface and raising your leg off the ground for at least 30 seconds. The same should be done with the other leg, and reps should be increased as the pre-season progresses. This simple exercise will get all the relevant muscles in your legs working in tandem to keep you upright and steady, and it can be performed between drills, during your warm-downs and even at work.

Protect yourself from strains and stretches Your weary muscles will need protecting throughout the pre-season – and particularly at the start. It’s vitally important that you perform warm-up routines before every training session, which should include dynamic stretching exercises and some light jogging. However, it’s equally important to gradually cool down at the end of a session. This can be done through a series of static stretching exercises and more light jogging.

Of course, the best way to ensure a successful pre-season is to keep yourself in reasonable shape throughout the summer. With a gradual and sustained approach to conditioning, you should be at the very peak of your physical powers for the first game of the season.

The equipment used for these drills can be purchased from our training equipment department.