Can McDonald's Be the Unlikely Saviour of Grassroots Football in the UK? 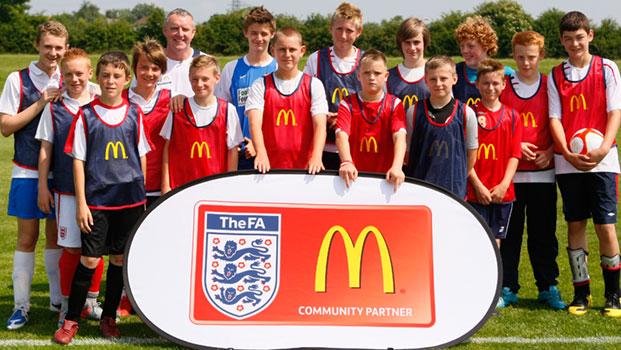 Think McDonald’s, and images of obese children, greasy fries and unsightly litter probably pop into your head. However, as the fast food giant tries desperately to change its image, grassroots football in the UK has been an unlikely beneficiary.

After a successful 12-year partnership with the UK’s governing bodies, McDonald’s has announced that it is to extend its sponsorship commitments at the grassroots level for a further four years. And part of the deal includes the supply of 250,000 football kits to local clubs throughout all four home nations.

The announcement was made with the help of Arsenal midfielder Aaron Ramsey at the home of Larkspur Rovers in West London – which is one of the 7,200 FA Charter Standard clubs that will receive Nike or Adidas kits every season for at least the next four years.

Of course, McDonald’s is getting a lot in return as part of this relationship, including a huge amount of publicity at community level and the goodwill of politicians and parents throughout the land. Nevertheless, this is a hugely impressive gesture at a time when local clubs are struggling to stay afloat – despite record revenues at the elite level of the game.

McDonald’s has a long-standing and extensive association with grassroots football that stretches back as far as 2002. As well as its commitment to supply football kits to a quarter of a million local players every year, the fast food giant is also working with clubs to ensure they have the support required to gain accreditation from the four associations of the home nations. This includes the provision of basic facilities and the fostering of safe and productive playing environments.

However, one of the most effective ways in which McDonald’s promotes participation in local communities is through its Community Awards Programme. This initiative rewards the efforts of coaches, parents and administrators who change the lives of local players in communities up and down the country.

The work that volunteers do in local leagues and clubs throughout the UK is all that stands between success and winding up, which is why recognising these efforts is so important. The Welsh FA has appointed Ian Rush as an ambassador for the awards in Wales, and the winners will be announced at a lavish ceremony at the Cardiff City Stadium in October. This level of recognition is usually reserved for the game’s elite, so to have local people honoured in this way is very important if more volunteers are to be enticed into the game.

McDonald’s has also made a commitment to inspiring youngsters to play football from pre-school age. A series of impromptu ‘kick-abouts’ are planned for all areas of the UK over the next year. For many kids, these events will be the first time they’ve ever kicked a ball. As well as being a great day out for all the family, McDonald’s ‘kick-abouts’ are about showing kids how much fun playing football can be. There are no training drills or intense practice matches at these events – just lots of fun.

A series of Mcdonald’s community football events have been taking place throughout the summer – aimed at raising awareness of the FA Charter Standard initiative, how it can help local clubs to improve and what McDonald’s and the FA are doing to encourage increased participation at the local level. The likes of Ray Parlour, Sir Geoff Hurst and Dietmar Hamann have all thrown their weight behind community days in cities across England, and the anecdotal feedback has been exceptionally positive.

The more cynical onlookers might view the involvement of a fast food chain in grassroots football as cynical. And while that suspicion may be justified, does it really matter where investment comes from? The FA, Premier League and Football League simply aren’t investing enough into local football to ensure its survival, so the money has to be found elsewhere.

The only thing kids are worried about is having a kit, somewhere to play and a support network around them. The answer to waning participation in grassroots football is simple: more money. While McDonald’s alone won’t be able to reverse the alarming trend of local club closures, the fast food behemoth has proved that a relationship between football and the private sector can breathe new life into the local game. If more companies realise that supporting their communities in this way can deliver substantive commercial benefits, grassroots football may finally get the long-term investment it so badly needs.