The 2014 Review of Grassroots Football in England 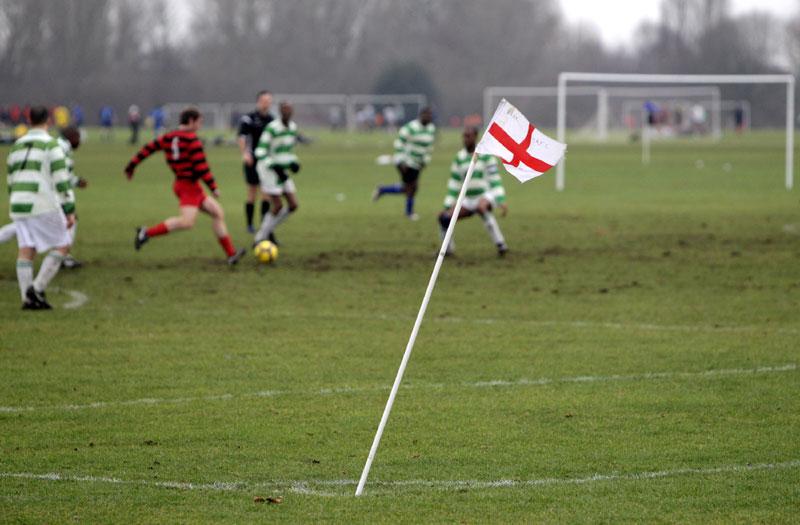 2014 was the year that England, once again, failed miserably at a World Cup Finals. But there were signs that a major corner was turned at grassroots level. The fate of England’s national team will always be inextricably linked to the health of the game at local level. Thanks to a number of initiatives, 2014 has been a year of progress for grassroots football in England, but it seems there is still much room for improvement.

Protests gave the plight of many local clubs much-needed exposure

Despite promises to use five percent of its TV revenues for supporting the grassroots game, the Premier League’s contribution dipped below one percent in 2014 – prompting a petition to Parliament and a series of organised protests. This lack of support, combined with falling contributions from the FA and the UK government, inspired a day of national protest, during which 90 percent of grassroots matches were boycotted in a single weekend. From London to Newcastle, local clubs, coaches, players and officials stood up for a better deal for the grassroots game – and shone a light on the worsening situation for football in the community.

Greg Dyke used 2014 to launch his new FA commission – designed to raise standards at every level of the game in England. He and nine leading figures in the game convened for the first time in order to dream up new and innovative ways to improve the fortunes of the England national team. Among the initial recommendations made were the raising of the minimum number of home-grown players in a Premier League squad from eight to twelve, increased restrictions on the granting of work visas for overseas players and a fifth tier for the English game – featuring reserve teams from the 20 Premier League clubs. So far, none of the commission’s recommendations have been implemented. Indeed, most of them have been derided as unworkable and impractical.

The greats of the game got involved

Gary Neville shone a light on the state of the grassroots game in England by using his hometown team of Bury FC as an example. Despite Bury facing extinction, just one of its squad of 30 was home-grown at the start of 2014. Neville has since been actively involved in recruiting young talent from the streets of the town, as well as giving kids the opportunity to hone their skills in environments conducive to learning. Ian Rush weighed in to the argument by calling for increased efforts in developing youth and community players. And Joey Barton utilised his own blog to talk about the state of grassroots facilities up and down the country. He also acquired thousands of signatures for a Parliamentary petition on the issue.

It is estimated that more than 160,000 grassroots players have stopped playing the game at local level over the course of the last decade. Such was the alarming slide in participation, Sport England decided to punish the FA by cutting its funding for community-based projects by £1.6 million. While this seemed counter-productive at the time, it spurred the FA into action – and gave the issue some much-needed media exposure.

A survey commissioned by Sky Sports in 2014 revealed that 65 percent of people within the game believed that local councils weren’t doing enough for the survival of grassroots football in England. Alarmingly, 84 percent of respondents said that the FA was failing community football. This survey may not have been conducted scientifically, but it demonstrated that grassroots football in England is in crisis.

Manchester City Raise the stakes in the development of local players

Despite being the world’s biggest spenders in recent years, Manchester City revealed their strategy for the future in December 2014 – by opening their £200 million Etihad campus. Connected by a bridge to the Etihad Stadium, the complex features 16 training pitches, three state-of-the-art gyms, six swimming pools, a hotel complex for players, a reserve team stadium and a fully-equipped clinic. While the price-tag has been mocked by many within the game, it’s worth remembering that Real Madrid paid around £170 million for Cristiano Ronaldo and Gareth Bale. City’s vision of developing local talent could prove to be an economically sound one – and provide the England national team with the kind of talent that is capable of winning a World Cup.

There is little doubt that community football in England is under-funded and under-appreciated. However, there are signs that the footballing authorities are finally taking the issue seriously. But unless investment levels are increased significantly, 2015 looks like being another year of deteriorating facilities and falling participation levels for English grassroots football.